I'm thinking that it's time for a couple of updates since it's been brought to my attention that I've left a few of you hanging...

** H&R Block continues to be a nightmare for us. We turned in the last of our paperwork on April 15th (no comments, please) thinking we would sign and pay and send our taxes on their way to wherever it is they go. But on that special day, we were told that there was one more form that needed to be filled out - a certain K form that tells the government that we didn't actually sell my mom's house but the trust did. That would take an extra day. Two at the most.

Our friendly neighborhood H&R Block office closed. Gone. Adios. And the office that's open year round (on the other side of our city) has tried (although not any too diligently) to locate our paperwork and/or the man that was supposed to be finishing our taxes. However, they are only open on Tuesdays and Thursdays and it's tough to catch them, even then. Yes, we are delinquent on our taxes - not necessarily through our own fault - and no, we will not be getting the government check everyone's talking about... because, uh, we haven't filed.

** My back is doing good, but my left hip and thigh are still causing me some sleepless nights. I'm still on pain pills and I still forget to take them on a full stomach. So, I still get nauseous in the mornings. I wonder when I'll learn? Maybe about the same time I get my taxes filed.

** And we've finally gotten our nearly 17-year-old child to get a job. She starts training at Curves today as a "Circuit Coach." Her stipulations for working were simple...
"I don't want to start at the bottom. I don't want to earn minimum wage. And I don't want to work where my friends might see me." In other words, she wants to start as the CEO.

Last night though, she sat me down and told me (in no uncertain terms) that the only reason she is working is to get the car that we had promised her, when and if she started working... and by the way, now that I'm working, when can we go car shopping?

Soon, Dear, soon. Get the job first. And work at it a little.

But she's angry she has to work.

I gave her an option though. She can get a car two weeks before she starts college (like I did) and not work now... OR she can work and have the car. She just doesn't think life is fair. But then neither do I. But hey, get over it.

Kids in Texas start working earlier. They really do. As soon as a kid turns 15, he gets a job. That's just how it's done here. I'm not necessarily for that but then all kids have cars at 16, to get themselves to their jobs. So, it's a trade off. You want the car, you get the job. And I get to stop paying for all your movies and dinners out with your friends.

I look forward to her learning the value of a dollar. I don't expect that to be any too soon though.

** Oh one more thing... this is what the little sprouts hope to become... 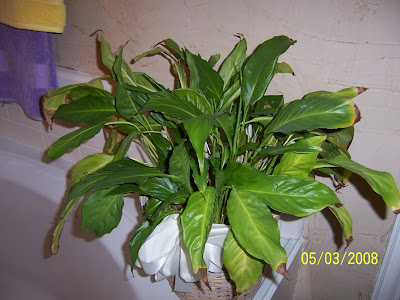 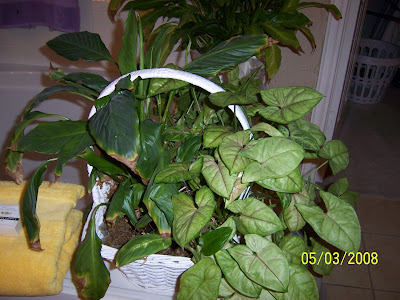 The above two plants were given to me when my father passed away in 2004. They are still alive today despite my missing green thumb. 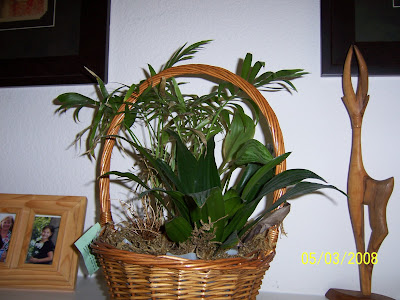 was given to me at my mother's funeral last year. Oddly, it's still alive, too. I have no gardening talents at all so I'm very proud of having kept these guys alive.

And the sprouts? Well, since I don't have anything to show for my brother's death last year, I'm growing some little seeds that I found in his truck when we went to Santa Fe to clean out his house and truck. It seems he had just been to a nursery and bought two packets of "Basil." I've finally gotten around to planting them... completely in his honor.

I planted several other types of seeds while I was on this gardening frenzy... but only the basil has taken root. It's kind of exciting. 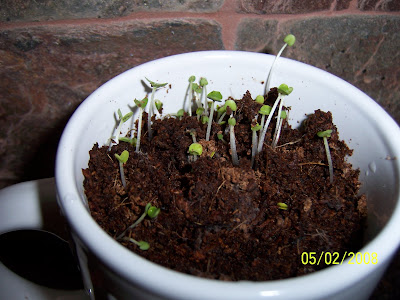 Here's it's friends... the one's that aren't growing. 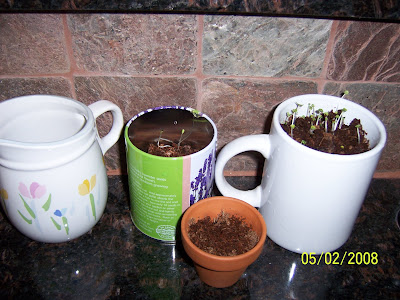 The little can in the middle is also Brad's basil. The two other pots are hyacinth and marigolds. We are currently hyacinthless and marigoldless. But who cares... we've got a basil sighting.

** And finally - Elizabeth is getting ready to go to "work." She is not happy. She is not saying nice things about me. I can only imagine what she'll do to the ladies at Curves today. I would not want to be there. Fortunately, I won't be. My hip is still on strike. Maybe this hip/leg/back injury was a good thing after all...
Posted by - Kris - at 7:43 AM

"I don't want to work where my friends might see me."...hmmmm...that sounds so familiar...where have I heard that before....hmmmmm..oh yes! from the mouth of MY 16 year old!