...and already driving her 7th car.

Here's a quick run down, because I find it so amusing. Especially since I had ONLY JUST gotten my first car when I was her age.

In 2007, when my mother died, we inherited an old Cadillac that I knew could not cross the desert back to Texas. Elizabeth wanted a car so badly that we told her that that car was hers, but that it had to live in California. She kissed that car goodbye when we had to leave.

Three weeks later, my brother died and we inherited an old truck and an old motorcycle. Elizabeth was now the proud owner of three vehicles, two of which had to remain behind in New Mexico and one which was still in California.

For her 17th birthday she received a real car, a 1993 Ford Explorer, which she had for a year until it was handed over to my nephew. That happened when I purchased a new car but was unwilling to part with my old car... my Mitsubishi Endeavor. So Liz got it... and we all know what happened to the Mitsubishi two weeks ago.

In the meantime, we received word that we were actually receiving $10,900 from the insurance company. And in the meantime, Liz found a different car. A GORGEOUS 2005 RED convertible Toyota Solara, which after much finagling with both dealers, now sits in our driveway.

We still haven't received the check from the insurance company and Liz still hasn't completed her driver's refresher course, but we managed to clean out everyone's bank accounts so that we could finalize this deal.

And am I ever glad it's over! Well, it will be over when Liz finally completes her course tomorrow and can drive her new baby herself.

1) The little gold Sebring that never left the dealer's lot. I was never in love with this car. But she sure was. 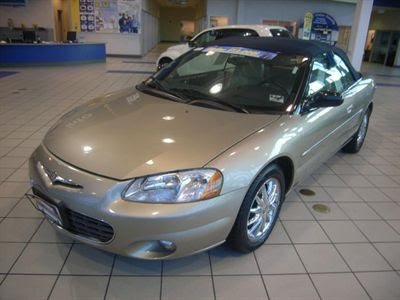 and 2) The red Toyota Solara that has now come to live with us. I won't lie, this car is HOT! And I look good driving it!

Okay, yes, it's Elizabeth's car but hey, I never had a convertible. This was my first time driving a convertible! 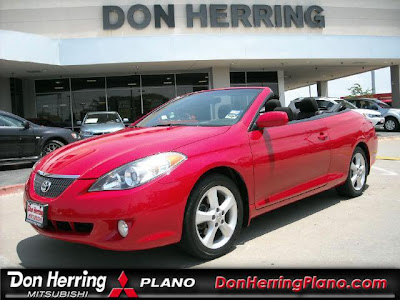 And knowing Liz? That was my last time driving it, too.

I wasn't crazy about the Sebring, but the Solara.... YES!!! We drove one around Maui last year and were amazed at the huge trunk and roominess of it. And, yes, it's gorgeous, too. Hmmmm... I don't think this car can live outside Texas, certainly not in AZ?

My name is SADIE!