I could not have made this up...

I swear this sounds like a professional writer wrote this… but it really did happen to Karla, my friend in Bakersfield who had to live through this. Hope she doesn’t mind me sharing… ! 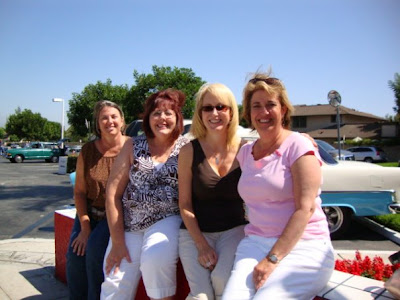 Karla is the one in the black and white top. Second from the left. Bonnie, Melanie and Cara you can learn about later... but Karla? Well this could only happen to Karla.

You haven't lived until you've had a breast MRI.

I arrived for my MRI at 2:00 and immediately had to run to the bathroom with explosive diarrhea. (Nerves, Karla?)

They called me back and gave me a three-holed gown and a pair of scrubs that wouldn't fit a toothpick to put on. I said I'd pass on the pants and go with the gown only.

After finally figuring out how to wrap myself up in the thing, I locked my belongings in a locker and sat down and waited to be called in. The lady ahead of me said they told her they were running an hour behind. I was not in any hurry. There was a TV in the waiting area turned on to HGTV channel. (Kris' note: I wouldn't mind having this MRI if I could sit and watch HGTV for an hour…)

They called me back to start an IV. She asked if I was diabetic. I told her I was borderline Type 2 and took metformin at bedtime. They had to stop and call my doctor to get clearance. That took 20 minutes. Then the nurse started an IV with no problems.

Then she took me back to the waiting area for the MRI.

The technician asked if I had a problem with a male MRI tech. He said they needed to position the breasts in the machine. I said no problem. I then walked into the room to find this huge machine that looked like the time tunnel. As I approached it, I see what looks like two vegetable bins you'd find in your refrigerator. He said you need to drop both breasts into the bins and lie perfectly still for the procedure.

The gown was a waste as I had to get out of it to expose both breasts to drop them into the bins. Then they had to "adjust" each breast in the bins.

This whole time I am kneeling on this contraption with my butt up in the air like an ostrich with its head the sand. My butt is uncovered and sticking up in the air. That must have been a sight. The female tech finally covered my butt with my gown.

I was trying not to laugh hysterically as I thought of a man having to undergo a similar test.

They did give me a blanket and two pillows to prop myself up with. But I was face down, breasts down, butt up, going into the tunnel.

Once in, they had to hook up the IV as this was an MRI with contrast. They put a panic button in my left hand and instructed me to squeeze if I needed to get out in a hurry. At this point, I was hoping that the explosive diarrhea wouldn't hit me while in the tunnel.

They gave me earplugs and started up the machine. It was loud and sounded like alarms were going off everywhere. Then I felt the stuff being pumped into my IV. My right hand was going numb and was starting to twitch. They had told me to lie very still and not move and to breathe normally. I could hardly breathe at all. My hair was down in my face tickling me. I stayed in this position for what seemed like hours--praying all the while that I did not have to do it over!

Finally, I felt some air enter the tunnel and a loud alarm sound. I figured I had broken the machine somehow and was going to need the jaws of life to be extricated.

They regreased the sides and slid me out. It took a while to be able to get myself out of the vegetable bins, but I did it. My chest felt like it had been crushed. I re-exposed myself again to try and get the gown back on and cover my butt. I then walked out to have the IV removed. Came out, no problems, no pain.

Shuffled back to the locker area and gathered my belongings and went to a dressing room to put my clothes back on.

Finally, I was dressed again and walked out to my car and drove myself home.

And you thought a mammogram was bad???