Liz and I played hooky one day a few weeks ago and headed to the Texas State Fair. Hey, if it was good enough for Oprah...

Anyway, we were both in the mood to eat… and that’s mainly what you do at the fair. Eat. And eat.

Each year the fair offers something new that’s fried. Yep, FRIED. I’ve tried fried coke and fried grilled cheese… this year’s offering was fried butter. Yep, fried butter. Butter, yet! Wasn’t up for that one… but I’m always up for the “corney dog” that is famous at the fair.

So, off we go. Liz had this great idea that we should take the DART train instead of driving. I was game. Sort of. Okay, not really. But I went.

She navigated us to the Walnut Hill station somewhere in Dallas, got us onto the Red Line, had us switch to the green line at the Pearl station, got off at Fair Park and VOILA! There we were at the entrance to the fair! Just that easy.

And I will NEVER do it again.

First of all, it took 40 minutes just to get to the train station, fifteen minutes to wait for the train, twenty minutes on the first train – stopping at EVERY station along the way to pick up people – ten minutes in the second station to change trains, twenty minutes on the second train… Heck, I could’ve driven the whole way there in less time, been parked and had a corney dog in my hand before our train had even departed the second station. No, really.

And did I mention that we didn’t have seats? We had to stand the whole way. I’ve been on a New York subway once. This was darn close to the same experience.

And don’t even get me started on what type of people take the DART train, thank you very much.

Liz commented that I got to experience a little bit of the ghetto. She wasn’t kidding.

But we did make it to the fair. In time for lunch. And not much else.

Liz has a new job where she picks kids up from school for a working mom, so we had to leave the fairgrounds at 1:15. We had only gotten there at 12:00. 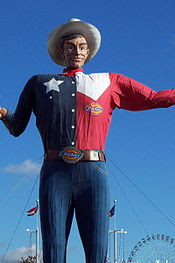