Our furry daughter is not doing well... 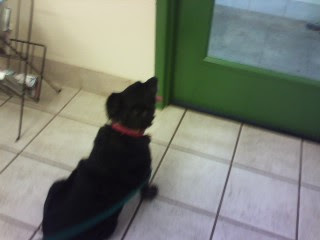 We've had Midnight for over ten years.  In fact, we got her on Elizabeth's tenth birthday... and she was fully grown then.  Nearly eleven years later, Midnight is still with us, but her time on earth is limited.  It's drawing to a close quickly.  And I never thought I'd bonded with her particularly until now.  Oh, yes.  I have bonded with her.  And she with me.
Midnight is sick.  She's not well and she's feebly getting around ... barely.  I think every hair on her body is in pain and her whimpers confirm that.
So, before we lose her, I thought I'd take a look back at some of the fun and funny times we've spent with our little girl.
The picture above shows a typical trip to the vet.  Probably just for a check up.  But it didn't matter.  Midnight did not want to be there.  And as soon as she stepped inside, she just that quickly turned around and waited to exit.  She knew where she was and she did not want to be there.  Can't say as I blame her. 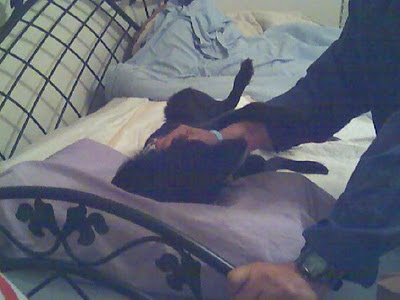 Rick and Midnight bonded very well.  From Day one.  And Rick spoiled her rotten.  Above is Midnight getting to laze around on one of our beds.  Rick had even shown her where her head goes.  Yes, up on the pillow.  Spoiled dog ... 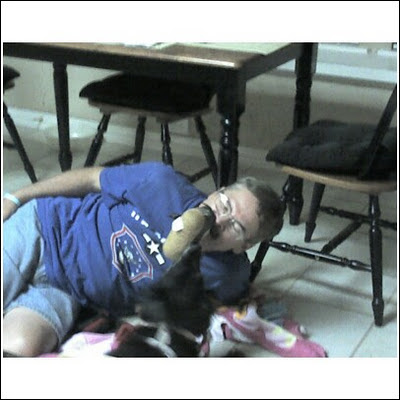 ﻿
Above ... Rick and Midnight are doing what they do best.  Wrestling.  And the smaller one usually always won.
﻿ I loved teasing Rick by putting things on him when he was asleep.  And I certainly didn't want Midnight to feel left out.  So here she is ... sporting a Sonic receipt and sticker.  Looks pretty good on her.  Even though she had no clue it was there.  I'm going to miss her willingness to let me torture her.﻿ 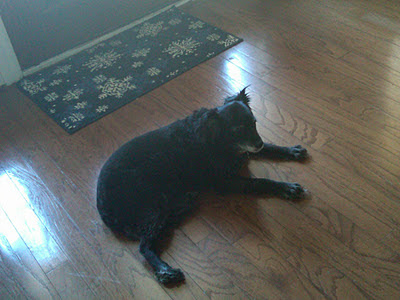 Midnight liked our wood floors ... Not.  Nope, she actualy hated them and tried to avoid walking on them whenever she could.  ﻿ Occasionally she would lie down on them, but only to avoid having to walk on them.  The shiny wood floor caused her feet to slip and she knew how foolish she looked prancing on them, trying to avoid slipping. 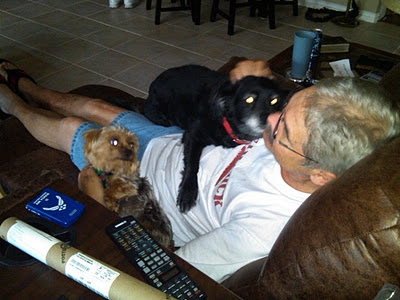 ﻿
Dog pile on Rick.  Midnight's favorite place to be ... and buddy Winston's favorite place also.  Winston was a guest in our home a couple of times, until Midnight got just a wee bit to old to have guests anymore.
Poor Midnight.  I hate what she's going through right now ... but I'll always cherish the time we've had with her.  And the time that we have left.  I don't know how much time is left, but we are trying to let her know that we are here with her through this journey.
Sigh.
Pets are so therapeutic for us.  I hope we are the same for Midnight.
.
Posted by - Kris - at 3:09 PM