Picture, Picture on the Wall

And cleaning my house required much more than sweeping, vaccuuming, dusting and making the beds.  Much more.  It required a total makeover.  TOTAL MAKEOVER.  I wanted all new furniture, in fact.

One picture in particular that had to be replaced was the one over our bed.  I just hated what we had hanging over us.  It was a flower.  A red flower.  And not a pretty red flower.  So, it had to go.  Never mind that the bride never even came in our bedroom nor even anywhere near the hallway that led to the bedroom.

I hunted and hunted and finally found a white flower that I liked.  Another flower, you ask?  Well, I'm not really addicted to pictures of flowers... in fact, I hunted for people, for gardens, for travel posters, even.  But only a white flower spoke to me.

Of course, it didn't come framed.  I would have to get creative and figure out how to frame it and how to mount it and still make it appear cheap enough to be classified as a bridal decoration... for Rick's sake.

I decided I could save money by putting the white flower picture in the original red flower's frame.  Too bad they weren't the same size.  Not even close.  So I had to break down and buy a new frame.  I just had to.  And it really couldn't be just any ol' frame.  No, I decided it had to be a pretty frame.  A stylish frame.  A lavish frame.  Yes, I found a lavish frame.  But I knew I could still convince Rick that it was all for the good of the bridal shower.

"NO!" I insisted.  I could hang a picture better than that.  And we went to bed.  And fell asleep.

Ok, why does Rick always have to be right?

Capital C, capital R, capitol A ... you get the picture.

Down it came.  And even though I'd centered the picture beautifully, Rick took the hit.  Right on his head.

In my sleep, I heard the crash and assumed that Rick had gotten up and then fallen.  Hey, it's happened before.  I just could not accept that my picture had fallen off the wall.  Not my beautiful white flower!  It wouldn't do that...  But it did.  Apparently... white flower's lavish frame was a tad heavy.  Just a tad.

Insisting that this was all Rick's doing, I yelled at Rick and told him to stop making so much noise.  I sneered at him for being clumsy.  Rick had a few choice words for me.  Yes, he did.

Lights on and I assessed the situation.  Glass was E V E R Y W H E R E.  My beautiful white flower was not quite as beautiful anymore.  It was about as wilted as it could get.  Wilted all over the place.  And the lavish frame?  Smashed into pieces.  Lots of little bitty pieces.

The shower did take place... and no one was the wiser that the white flower hanging on the wall over my bed was a substitute.  And it's frame... was still lavish.  Glued back together... but lavish.  Black Sharpies can color in all kinds of nicks and bumps.  And glass?  Who needs glass?  Pictures look just as nice without glass on their fronts.

And all was well... until last night... when the substitute white flower decided to hop off the wall, too, taking its glued-back-together frame with it.  Right on top of Rick. 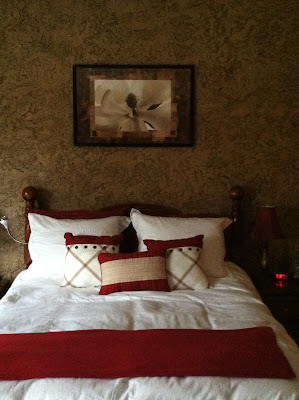 Here's a close up of the white flower.  This is frame number 2.  Not the lavish one.  The lavish one is no more. 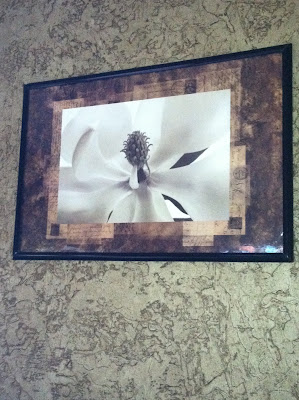 Here's a few of the decorations I put together scattered around my house.  Below are the shoes that I wore in my wedding.  22 years ago.  23?  Nope, 22.  I keep losing count.
The cake (which I didn't get a picture of) was in the shape of a beautiful white wedding gown.  My shoes sat next to the cake and adorned it beautifully.  The candy dish in the picture was my mom's.  I tried to sell it at a garage sale recently but had no takers.  Now I'm glad.  I'm rather fond of it now, since it worked well on my table.
That's the bride's invitation there, in the basket with the purple flowers.  Her wedding color was purple. 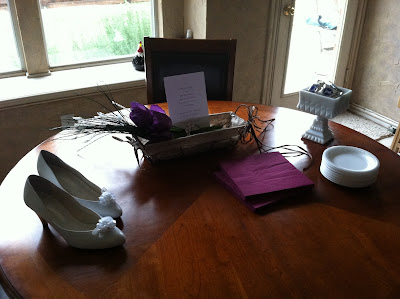 Below is another decoration.  That's my coffee table.  Candy and purple flowers.﻿ 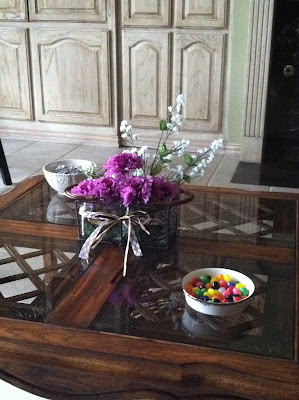 Below is my front porch.  I even decorated there.  Well, don't strain your eyes looking for purple flowers.  You won't find any.  All I did was place that big ol' pot there and put in a plant.  It was in need of something there...  And you see those green chair cushions?  They were red just a week before.  Well, the green ones weren't red... there were red ones in their place.  Green looked much better and they matched the plant.  Cushions have to match plants, you know.
And I convinced Rick that they were party decorations.  I wonder if he bought that?﻿ 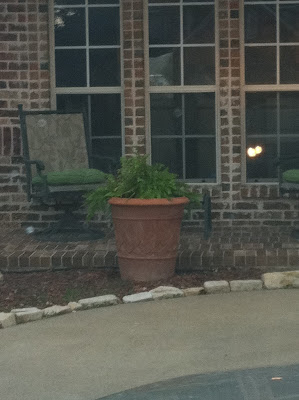 I put one of my cookbooks out on display.  Why not ... It needed to come off of its shelf.  I don't think it's ever been used. 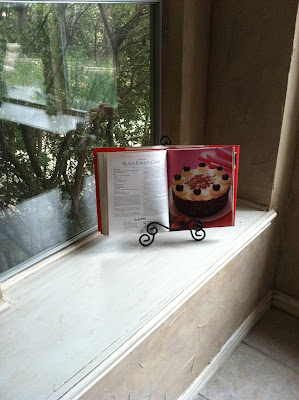 The "home" plac below was intended to be part of my cousin Amy's wedding gift.  Her wedding was a week later, but I just couldn't part with it.  It looked too cute next to the sage green pitcher/vase I bought.  Both items got to stay with me.  Sorry Amy. 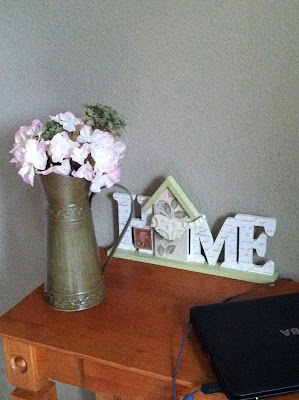 Another table decoration below.  This one is glass jars in a wicker container that sat upon another table I had. 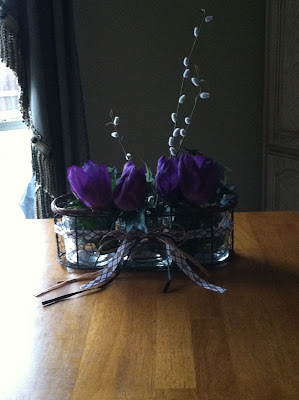 So, that was my shower.  I threw a Christmas party a few weeks after the shower and if I could've gotten away with it, I'd have left all the decorations in place.  Well, actually I did.  I just changed out the purple flowers for red ones.  I had to.  I had to convince Rick that everything I bought could be used more than once.
'cept for the white flower picture.  It had a shorter shelf life.
.﻿
Posted by - Kris - at 4:40 PM