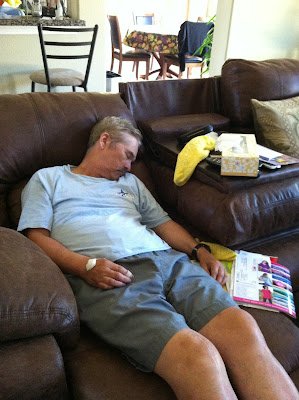 This is Rick on the second day that he was home.  Wanna play a little game?  Spot the differences in the two pictures.    It appears that just the yellow socks are gone.  And the women's clothing catalog that he appeared to be reading.  Hmmmm, that wouldn't put me to sleep. 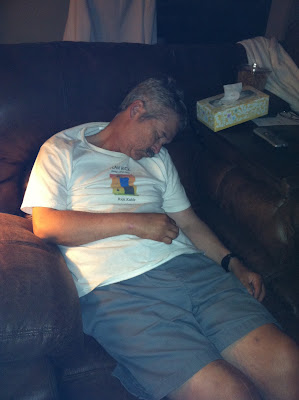 Below is Rick in the hospital.  The differences in this picture are obvious.  There's food involved here.  Notice how the meat is on his fork.  Yes, he fell asleep pre-bite. 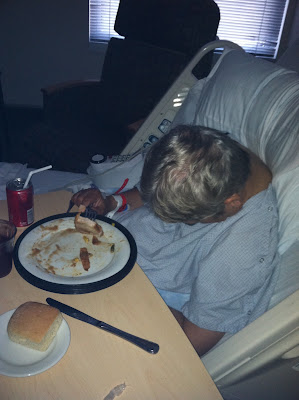 He'd kill me if he knew I was posting this.  Oh well.  I've been killed by him before. 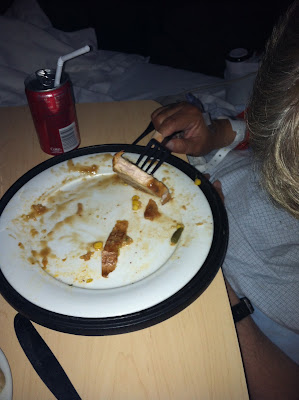 Rick remained in hospital care all weekend, and was up and walking by Sunday morning.  PT stepped in then and worked his legs.  Probably more than they'd been worked in a long time.  And by Monday, Rick was released and brought home to ... uh ... sleep.

So what was it?  The hospital was leaning towards a TIA (small stroke) although I do not agree with that.  Rick's health had been declining for a couple of weeks.  Strokes don't happen like that.  They do know that his Phenobarbital level (a med he takes to keep his seizures under wraps) was too high so they sort of "detoxed" him from the two seizure meds that he has been on for fifteen years.  However, those were added back in once he got out of the hospital so, I guess they're still good meds.

Maybe I need a hospital stay.  'Cuz that's what earned Rick one...  confusion.

Heck, I'm always confused.  Maybe I need a permanent suite there.  And why not?  It appears that the food is good...  Rick darn near cleaned his plate before he fell asleep!
.
Posted by - Kris - at 9:35 AM