And you know what Rick said (after the new floor was laid and he could go back into his office)?

My favorite .... "How come you packed up all of my Gilligan's Island DVDs??

Sorry, Rick ... even Gilligan had to go.  The floor could not wait for the Skipper and his Little Buddy.

Rick swore at me (in his head) and told me where to go (still only in his head.)  He smiled on the outside but I could read his mind.

Rick no longer wanted to move if Gilligan couldn't come with us. 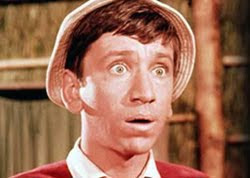