Somehow the Kahles managed to do something right and time it perfectly... because the Kahles never do anything right and 'perfect' isn't ever a word to describe me... but we found the bat bridge and got there right on time. The bats decided to take their nightly flight a little early and how about that? The Kahles got there early as well.

Unfortuntately I forgot my camera so my phone had to stand in... Hopefully you can see the bats, too.

This is the bridge we staked ourselves out on, with about 100 of our closest friends. Okay, so there's only two in the picture. Most of them were under the bridge or up on a hill. We were on the hill. The bridge filled up shortly after. 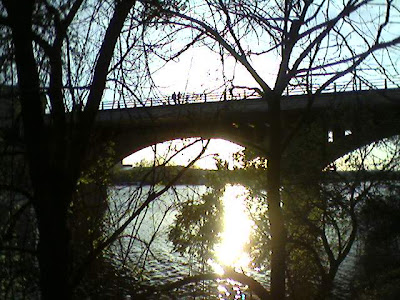 And right on cue, just as we were told, the bats took flight in search of their dinners... bugs.

The black ribbon in the sky is just a small portion of the bats taking to the skies. 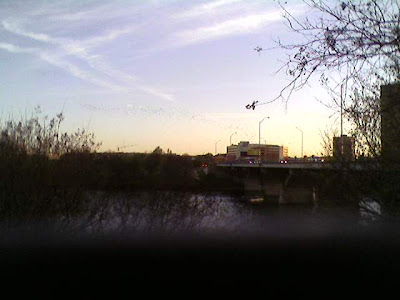 As soon as I put my phone away, the bats flew over our heads. Darn, no close ups. 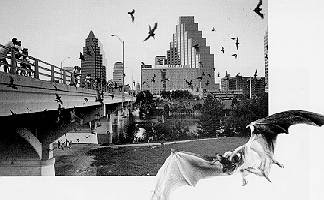 Here. This is a better photo. Not mine but it gives you a closeup of the little guys that are living under the bridge right near my hotel. Apparently this bridge, the Congress Avenue Bridge here in downtown Austin is the largest urban bat colony in the world. 1.5 million bats fly out at dusk in search of their dinner. I think I saw all 1.5 million. And just for the record, all 1.5 million are pregnant. I hate to think of how many will be there next year.

I've been on this bridge and seen the bats. Very cool.