The Girls Next Door

And speaking of the Playboy Mansion...

Elizabeth has a new favorite show. Yep, she does. "The Girls Next Door." And now she's hooked on it. So I had to check it out as well.

Uh, are those girls for real? Hugh Hefner's got a reality show and I cannot believe that this show is on the air. Or that I'm even watching it.

Every girl I saw was blonde. I've never seen so many blondes... I'm completely blonded out right now. Even if these girls weren't blonde... they would make you sick. And they're not, so they do. And they give blondes a mighty good name. 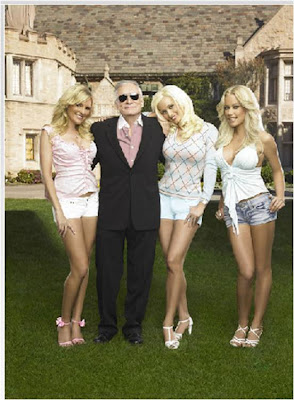 One of the blondes was having trouble keeping her shirt on. She's the March playmate from a couple of years ago. She really needs to keep it on though... it won't be pretty otherwise. She's not as trim as I'm sure she used to be.

Another blonde is upset because she had to go to school (I hope it's college, although one can't really be too sure) and didn't get to be in the shower photo shoot with the two other blondes. She was so upset, that Hef had to retake the picture so that she could be in it. And why not? She needs to be rewarded for going to school. That 5th grade diploma is going to come in handy one day.

And just about the time I learn who all the players are... Holly, Kendra and what's her name... I hear in the news that Hef and Holly have just broken up. Holly, the main squeeze is now going to be out on her own. Off of the show.

Too bad she's not the one with the diploma. 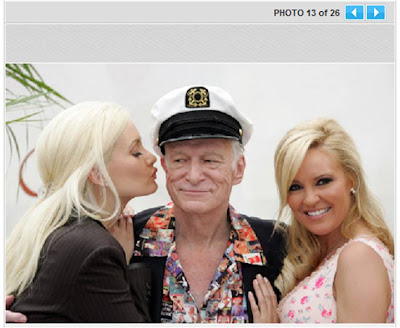