Meet Sheena. And the little brown rat that stopped by at feeding time for a snack, much to Sheena's surprise... and curiosity. 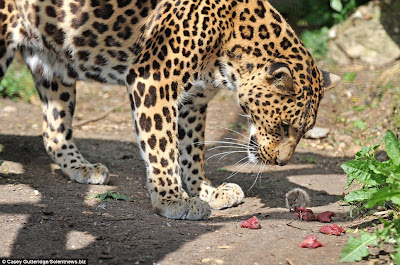 But even the imposing presence of Sheena, an adult leopard, at feeding time is not enough to get between the little guy and a free meal.

The little brown rat - thought to be only two to three months old - was spotted heading into the leopard's enclosure shortly after feeding time at the Rare Leopard Project, in Hertfordshire, England.
The little guy was so intent on its mission to grab a free meal, that it seemed not to even notice its close proximity to the 12-year-old Sheena.

Clutching a corner of raw meat with its tiny paws, the rat busily tucked in, until it sensed one of those whiskers moving in. 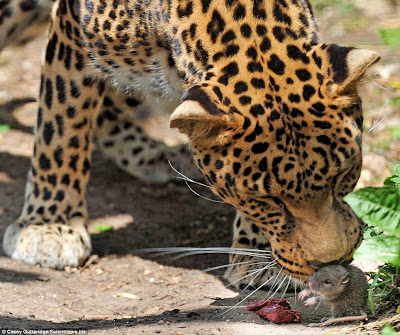 Sheena, a bit interested in the little rat coming between her and the remains of dinner, padded over on paws big enough to squash the little guy.

But instead of enjoying the rat for dessert, Sheena gingerly lowered her nose for a sniff.
Mr. Rat paused, lifted its little pink claws in submission then, obviously deciding on a nothing-ventured-nothing-gained approach - continued to tuck in. He did not run.
And after another tentative investigation, Sheena gave the rat the equivalent of a shrug and turned away. 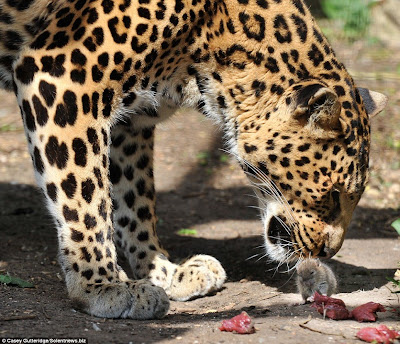 A spectator said, "I have no idea where it came from. It just appeared in the enclosure after the keeper had dropped in the meat for the leopard. He didn't take any notice of the leopard, just went straight over to the meat and started feeding himself."
He continued, "But the leopard was pretty surprised. She bent down and sniffed at it and flinched a bit like she was scared."

"It was amazing. Even the keeper who had thrown the meat into the enclosure was shocked. He just stood and watched."

An expert at the Wildlife Trust said the creature was, in fact, a young and 'inexperienced rat', identifiable by its big paws and ears. After the feeder threw meat in for Sheena, the rat just appeared. Sheena batted it away but it just came back. The determined little thing took no notice and just carried on."
This whole thing sort of reminds me of me. You put a pizza in front of someone else and watch out! I might just move in for the kill. Now if you put a pizza in front of me? Everyone else better watch out!!
.
Posted by - Kris - at 6:58 PM