The FBI needs your help!

Back in the '90s, the San Francisco Bay Area was terrorized by the still-unsolved Zodiac killings. Yes, still unsolved.

And today the FBI sent out a public appeal for amateur sleuths to help solve a key cryptographic clue in a 1999 murder case.

In June of 1999, police officers in St. Louis, Missouri found the body of 41-year-old Ricky McCormick, who'd been murdered and dumped in a field. The only clues investigators recovered from the scene were two encrypted notes stuffed into the his pockets.

"Despite extensive work by our Cryptanalysis and Racketeering Records Unit, the meanings of those two coded notes remain a mystery to this day and Ricky McCormick's murderer has yet to face justice," the FBI said in a press release. "We are really good at what we do, but we could use some help with this one ... Maybe someone with a fresh set of eyes might come up with a brilliant new idea." 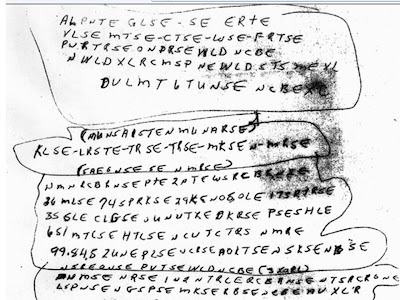 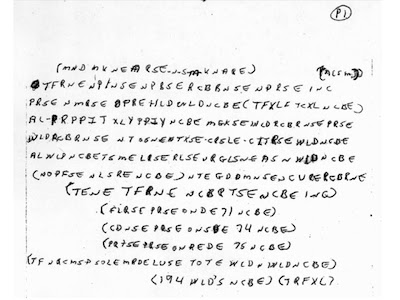 And so... the readers of Yahoo offered up their help. Some are pretty close. Some are right on the money (!)

1. These are instructions on how to keep the FBI busy for a decade.

2. I've been working on my taxes and took a break to read some news. These notes make as much sense as the pages of instructions I have been staring at for the tax form I received... Maybe they should send them to the IRS.

5. why don't they have that computer that was on jeopardy try to solve it...

8. I got this one ... It was Colonel Mustard with the Candlestick in the Conservatory.

10. It's a new contract for Charlie Sheen.

12. I'll quit taking my prozac for a couple of weeks, and I should be able to solve this mystery.

18. Hey, that looks just like the stuff my doctor writes! Find his assistant, she is the only one who can read that gibberish.

20. The circle around P1 means page one.

21. CSI miami should be able to solve it... they solve everything on TV.