... I left out one very important part of my adventures in Tucson.  Yes, I did... and y'all need to know this.

When Elizabeth called me, it was because she was in the stage of this illness where she could not quit throwing up.  And it was scaring her because she rarely ever throws up.  I believe she was a baby the last time it happened.  But this was some serious vomiting and it happened seven times.

When I got to her apartment in Tucson I was told NOT to go into her bathroom.  Of course I did anyway.  And I was really not prepared for what I saw.  This was projectile vomiting at its finest!  It was everywhere!  Except... the toilet, where it should've been.  And this crime scene would require some MAJOR cleanup.  By MAJOR vomit cleaner-uppers.

And... in case you don't believe me... this is how I spent my Friday afternoon.  Googling vomit cleaner-uppers.  (!) 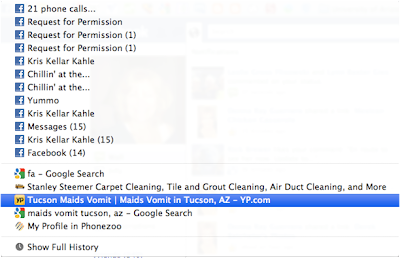 Stanley Steemer to the rescue.  Stanley Steemer was the only company brave enough to take on the job.  And they could only do the floor... but at least they could help.  Cinderella Maid Service?  They came.  They looked.  They left.  But first they called us a few names in Spanish under their breath.  Bonnie speaks Spanish.  Bonnie translated for us after they left.  Cinderella's fairy godmother would not be proud.

Oh, one more thing.  Elizabeth's rib is broken.  You thought I was kidding about that serious vomiting thing, right?
.
Posted by - Kris - at 6:21 PM