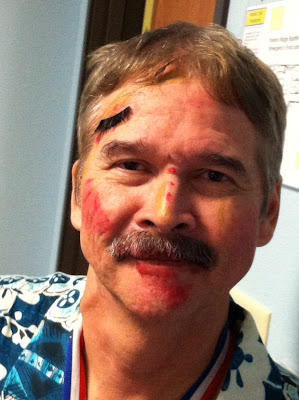 He was the star of a little play we put on on Friday night.  He did not glamorize himself, though.  No, I was responsible for that mess prettiness.
The play?  A silly version of Extreme Home Makeovers, without the home and without the 'extreme'.  Pretty much without the makeover, too, since the original version of Rick was really much better than the aftermath.
Three of the men of our church relented to being in the competition.  Three of the wives (their's) all sat behind them under a snuggy, acting as their arms while the men pretended to be looking in a mirror and getting ready for a night out on the town.  "I Feel Pretty" was playing in the background.
This man won.  But only by a hair, literally.  He won because his "arms" (wife) pulled out the perfume and sprayed him with it.  That got him the gold medal.  Too bad the perfume doused the man sitting next to him instead.
But after Rick's arms (wife) was able to stand up and see the end result... she felt he should've won regardless of the perfume.  That false eyelash up there was definitely award-winning.
"I feel pretty and witty and gay!"
Posted by - Kris - at 11:19 PM