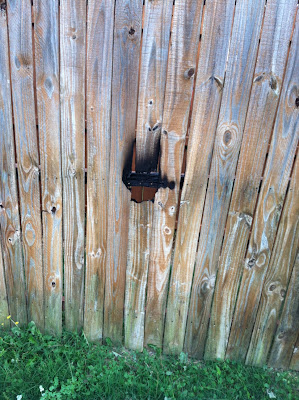 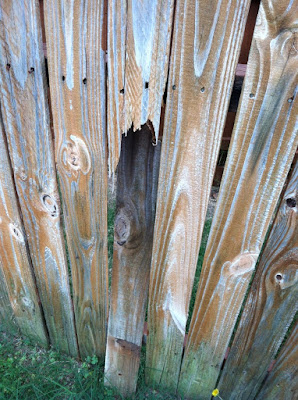 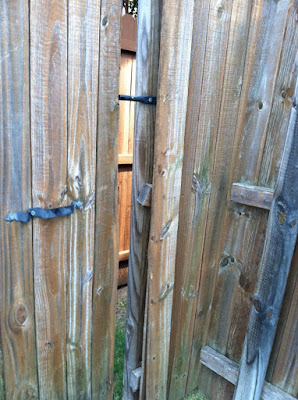 My current renter has just moved out of our townhouse and left us with some very questionable damage.  The back fence had been set on fire.  No doubt about it, there was a bunch of burned slats and they had all been burned on our side of the fence.  Yes, right in our little backyard.

But how did it happen, I wanted to know...

My renter said, "I have no idea what happened with that.  I rarely went out to the back and my daughter was home alone one day when she heard a neighbor banging on the back door.  He was saying the fence was on fire.  This was during the day when my son was in school.  I can only assume the latch to the gate was broken by the person who was banging on the door.  They said they put out the fire with the hose in the back.  This happened probably a few weeks ago.  I didn't want to assume or accuse the person who said they put it out... but for a minute, I did think that maybe they accidentally cause it and tried to fix it.  My first thought would've been my son but he was in school when my daughter said the person told her about it and put it out.  She was oblivious to what was happening.  Even didn't answer the back door because she was scared to due to the loud knocking.  Whoever it was came to the front door.  That's when she answered.  I don't even know if it was a neighbor, she assumed it was?  I was at work when she called to tell me."

The "neighbor" happened to see the fire... even though to get behind the fence, you would have to be only about 12 inches wide.  And when the neighbor saw the fire, he BROKE DOWN the gate to get in to knock on the back door, connect the hose to the faucet, turn on the water and then put the fire out... and the daughter was oblivious to the noise, yet she was scared of the loud knocking.  ??   And then the "neighbor" came around to the front door, which is a heck of a lot easier to get to simply by walking ten feet... and after breaking down the gate?  And suddenly the daughter wasn't afraid to open the door anymore... because the front door means it's safe to open now?

And since the fire is very obviously started on our side of the fence... I'll assume the "neighbor" broke into the yard first... and then set fire to the fence in that small area?  I'm kinda thinking it would be easier to just start the fire on the outside of the fence.  Unless breaking down the gate just seemed more practical.  Or more fun.

Gosh, it all seems so believeable... 'cept for those 100 cigarette butts on the grass right by the burned spot on the fence.  You know, that part I just can't figure out.