It was determined that Rick needed his hip replaced and it was determined that it could be done on Tuesday of this week.  I arranged and rearranged my work duties and had people from my church going to the hospital so that Rick would not be alone (or the lobby would not be alone) during the times that I couldn't get away from work to be there.  Yes, I got it all worked out.

And then the surgery gods all got together and decided that it would be more fun to wreak some havoc.  Yes, they did.

So, as par for the Kahle course, Rick's surgery got itself postponed, despite all the magic that I worked to be present for most of the surgery.  It seems (as it always seems to seem) that Rick's surgery could not be performed without a chemical stress test being performed first.  That has been the case for his previous hip surgery and his previous knee surgery.  All doctors want stress tests from Rick.  And Rick always passes them... so I always, always feel that it's a big waste of time and money.

In this particular case, I took Rick to his pre-op appointment on Friday... 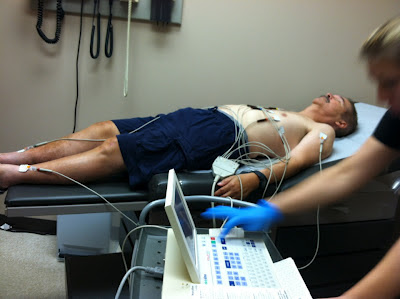 ... and he was given a complete clearance for surgery by his primary doctor.  She felt there was absolutely no need for a stress test.  And for that I was grateful.  However, no matter how grateful I was and no matter how great I felt, the surgery was stopped.  Right in its tracks.  Yes, the surgeon wanted a stress test.  He didn't seem to care that I'd jumped through lots of hoops at a brand new job to work out some mega details.

And no matter how much I begged and pleaded with the surgery nurse, she still would not reinstate the surgery until the stress test was performed, completed and passed.

So, that's our venture tomorrow.  A stress test.

But, not to worry, there are still plenty of hoops to jump through to get off work for this.  Plenty.

You think Rick'll appreciate all that I did for him?  Yeah, me, either.
.