Here's what we've been up to for the last couple of days.. 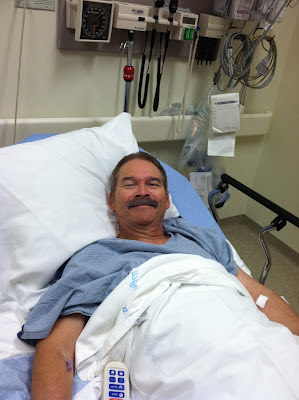 Rick has been in extreme pain for about a year.  It would actually come and go.  Well, it never really went, but the intensity would differ.  But this past weekend, Rick could stand it no more.  He had just had it with the pain that he lives in constantly, from the Scioliosis in his back and his replaced right hip and right knee.  This poor man just can't catch a break.

On Saturday night, I had the brilliant idea that Rick should sleep in a different bed... one I knew was more comfortable for his back (since that's what I believed his pain to be caused by.)  That bed... was upstairs.  Rick wasn't sure how he'd get up the stairs, but he agreed to give it the old college try.  I was just positive that if he had a good night's rest in that particular bed, he'd be good as new the next day.  I couldn't have been more wrong.  Not only was he not better, he was worse.  He was darn near paralyzed with pain.  And he was upstairs.  Oh, great.

Seeing him in excruciating pain, we both agreed that it was time to go to the ER.  I figured they'd give him some muscle relaxors and send him on his way... but they'd be extra strength pain meds and that was what he needed.

So, with the help of a friend, we worked diligently to get Rick down the stairs and out to the car.  Rick insisted that he did not want to go by ambulance (those were for sick people!) so since he agreed to go at all, I agreed to take him in my car.

I wish I had pictures of him coming down the stairs.  Three of us working, huffing, puffing, twisting, turning, pulling and yet gingerly getting Rick down those stairs.  It was no short jaunt and it was no easy task.  But we got him down (I know my friend Judy was scared... but I am a pro at all of this so I found it all amusing) and into a wheelchair and out to the car.  To the ER.  And there went my Sunday afternoon.

I know that most ER visits are seven hours in length (I have NO idea why, either) but after three hours, we had a surprise.  Rick's pain was so severe that he was going to be admitted to the hospital.

REALLY?  Yikes.  Hadn't planned on that.  I guess I was going to have to feed the dog now...

So... the above photo is of Rick, right after getting to the ER.  You can see he's not sick and he's really in good spirits.  A very different scenario from days of past when Rick didn't even know he was IN the hospital.

He had an MRI that night (after getting to his room) followed by xray after xray after xray.  And this hospital was quick in their results.  We both knew by the very next morning that Rick's left hip had deteriorated so badly that our only choice was a hip replacement.  Rick, took the news amazingly well and was even excited when his doctor told him that they were going to try to get it done immediately.

Immediately was not to be but we do have a surgery date for Tuesday morning and to that, Rick's response was, "Praise God!"  Rick is very excited to have an answer to his pain and a date to put an end to it all.

He came home from the hospital on Tuesday night so that he could save up his insurance paid days for after the surgery.  I did take some pictures of him in the hospital, though, getting some physical therapy, which made no sense to me.  Why they are working a hip that'll be going bye bye, I'll never know.

But that's our tale.  That's where we've been lately.﻿ 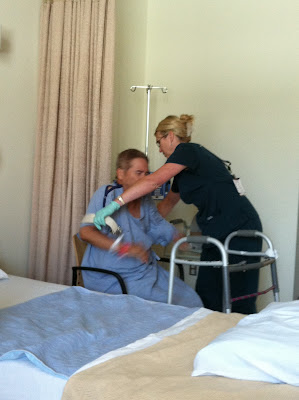 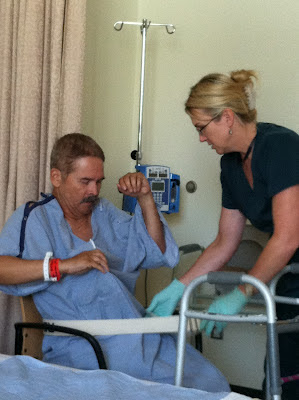 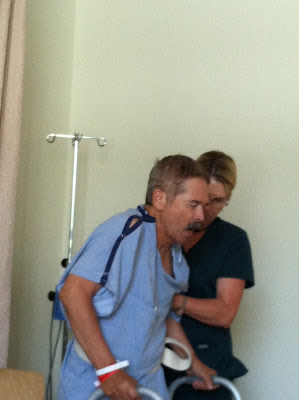 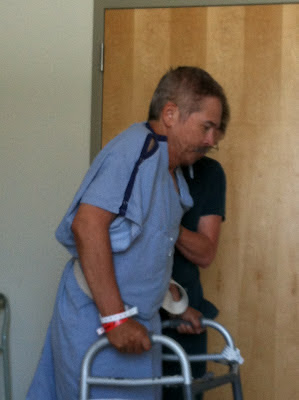 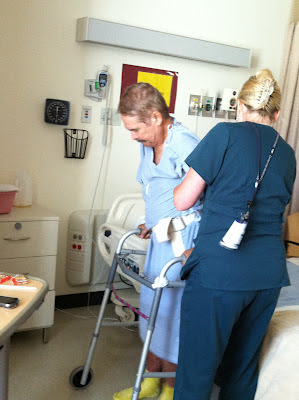 And before he got to come home, I did take the photo below... showing you just how well this little hospital visit went.  What a nice change from hospital stays of the past.

I can only hope and pray, pray, pray that next week's stay is uneventful and unremarkable.  Oh how I hope!﻿ 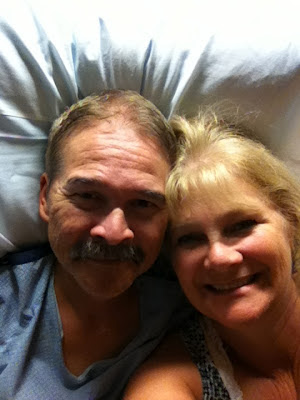