Thursday was better for all parties involved.  Rick was now beginning his physical therapy, all without the aid of a pain medicine, but he was getting through it.  It would take a full hour to do this... but he could now, with help, walk on a walker to the hospital door and back.  This was a big accomplishment.

Especially since... he was now covered head to toe in a rash.  A very painful rash.

Poor Rick.  Life just doesn't get any easier for him.

On Friday, Rick was scheduled to transfer to his rehab facility.  Elizabeth spent the day with him and waited with him.  The transfer was scheduled to happen at noon... of course, it didn't.  Rick got to his new location around 6:30 pm.

Here's the two of them, enjoying their day together... 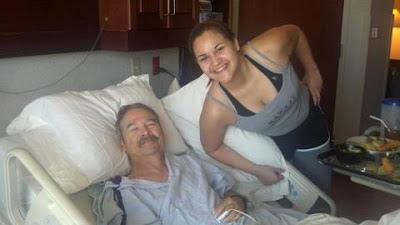 Rick is looking much better here.  Elizabeth, well, not sure what she had in mind when she got dressed on Friday morning.  I guess she was going to seek out a gymnasium in the hospital and do some jumping jacks.  Or maybe this was her attire to inspire Rick.  Either way, the two of them spent the day together.  And it was a good day.  Only a few cooky phone calls to me asking me repeatedly why I hid his rasor....  Huh?

After work and a drama rehearsal at our church, I headed to Two Rows to meet up with Liz for her final, farewell dinner in Texas.  She stayed with Rick through the transfer and then joined me there.