Yes, it's time to catch up to real time, here.

Let's recap, though, 'cuz even I'm confused what day it is here.  I'm alive and well and living in Tuesday.  Not sure where I lost the blog, though.  Somewhere on Friday, I think.  So, looking back...

Friday night:  Rick transferred to the new rehab center.  I met Liz for dinner and darn if the moment I sat down at our booth at Two Rows, she said, "Get up.  We're not staying."  But... but... but, my pizza...  I needed my pizza!

We wolfed down our dinner (I convinced her that pizza was very important right about then and that Rick could wait) and headed right back to the rehab center to check on Rick.  Rumor (Elizabeth) had it that he was spiking another fever.  So off we went.  Never mind that we needed to be at home, getting Elizabeth packed for her FIVE A. M. journey to the airport the next day.  Never mind that I'd been at work all day and a drama rehearsal all evening.  Never mind that I'd ... oh, never mind.

So, off we went.  It was a full 30 minute drive from where we were and it was already close to 9:00... but we went.  When we arrived, Rick didn't seem to have a fever but he was covered in a rash, head to toe.  Poor guy.  Life just isn't easy for him.  But it was very good that we went.  We got some medical issues cleared up, some new meds ordered and a few more goodbyes said by Elizabeth.  We stayed an hour, we drove home for an hour and darned if that alarm clock didn't start ringing at 4:00 am.  Darn that thing!

Saturday came and after taking care of business, I got back out to see Rick.  The rash was now taking over his life.  The nurse on duty there asked if she could give him some Benadryl.

NNNNNOOOOOOO!!!!!!!  No Benadryl, please.  Rick was still reeling from the affects of his last Benadryl dosage.

On Saturday, I also learned what "twilight sleep" meant.  Rick had had "twilight sleep" administered to him during the surgery by the arrogant Dr. Hopkins and I hadn't given it too much thought.  I should have, though.  Twilight sleep is, simply, anesthesia.  Mixed with morphine.  TWO THINGS RICK CAN'T HAVE.

I saw red when I learned that.  I shot Dr. Hopkins some pretty mean thoughts on Saturday.  Heck, I just wanted to shoot him period.

Fast forward to Sunday.  Despite the lack of pain meds (no one is sure what Rick can and can't have anymore) and despite the horrible rash he's enduring without anything to calm it (I've ordered Prednisone for it, but no one is really listening to me) Rick, trooper that he is, got out of bed and did his physical therapy.  And true to Rick form, he even showed off.  Good ol' Rick. 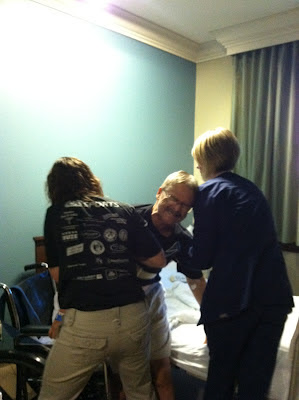 Simply getting out of bed.  Not simple for Rick, though. 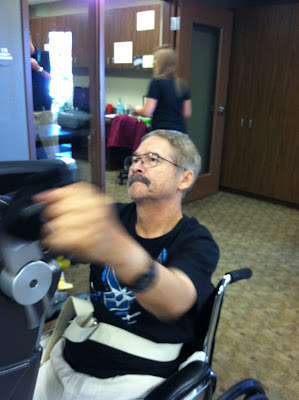 And done with absolute dedication. 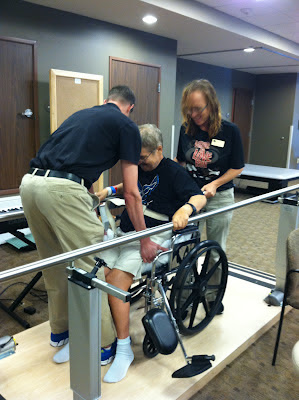 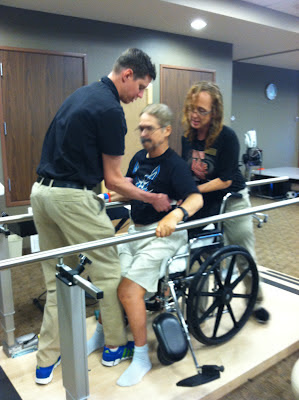 And up we go.  Fortunately, Rick isn't learning to walk again.  He's just strengthening his new hip.  And working the kinks out of it. 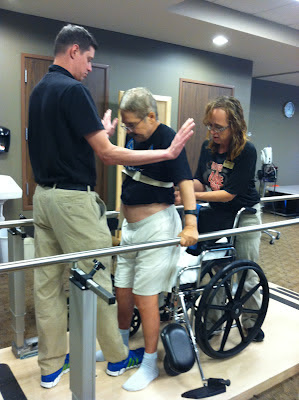 First time standing in a long time.  And the male therapist is holding his hands up to show that he is not assisting Rick.  Rick is standing by hisself.  Himself?  His self?  Grammar is not my strong suit today. 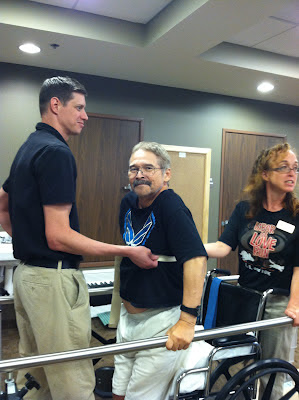 And he smiles for the camera.  That's very Rick.  He works best with an audience around.

So... as of Sunday, he was doing well.  And beginning to work hard.  Monday, not so much.  But that's another story for another day.  I'm just gonna relish in Sunday.  It was also my wedding anniversary.  Well, our wedding anniversary.  23 years.  Rick decided to celebrate it the best way he knew how.  By being in the hospital.  Geesh, Rick.  Get out of there already and take me out for a nice steak dinner.

Better yet.... let's go dancing.  And show off your new hip.