But that doesn't mean that life hasn't been a bit weird lately.

The night of the "stalking" left both Rick and I unable to sleep.  We kept getting up to look around the house until we were both exhausted.  But not exhausted enough to sleep.  Any little sound in the house would jar us awake in a flash.  But, alas, nothing came of our lack of sleeping.  No intruders every intruded.

Around dinner time of the following evening, I happened to pass by our front window and noticed a car PARKED ON MY DRIVEWAY.  Okay, seriously?  The gall.

I ducked behind a wall and grabbed my daughter sitting nearby.  "Go look out the front window!" I shrieked.  "There's a car on our driveway with the lights blaring right into our house!"  And she bolted to the window to see a car pulling away.  "They're gone," she reported back.  "They left when they saw me."  And with that, Elizabeth called a policeman friend of hers to report the mysterious goings-on.

"Okay, slow down," I said.  "You can't report a car in a driveway.  They very well could've been just turning around.  We may be over-reacting."  But, Liz still made the call.  And I was able to sleep that night pretending that the car was truly just using our driveway to change direction.  Never mind that there were already two cars parked in our driveway (ours) and a third car wouldn't fit very well.  It really made no sense for any car to try to use our driveway to turn around in.  Yes, I was going to believe the best.

And then... at 2:22 AM, a strange noise, a beep actually, awakened both Rick and I.  It came from our living room.  Was it a smoke alarm battery gone bad?  No.  That wasn't the sound.  I waited to see if the noise happened again, and it did.  It was like an alarm clock beep.  But the second beep was followed by a strange, strange blue flickering light that lit up the wall of the living room that I could see from our bed.

This was getting pretty scary.  The beep happened two more times, the blue flickering light happened one more time.  I lost my mind several times over, though.  I originally thought that my daughter had come downstairs and had turned on the TV and so I had called out, "Liz?" towards the living room.  No answer... but I chose to believe that it had been her... as she was known to sneakily watch TV in the middle of the night before.  And the flickering stopped when I called out her name.

By 2:45 AM, there were no more lights and no more beeps.  Rick had gotten up to use the restroom but I remained glued to the bed.  He offered (and started) to head into the living room but I convinced him (lied to him) that it must've been nothing and he should stay in the bedroom. (Translated:  DON'T LEAVE ME!!)  I reasoned that the dog hadn't barked... so it couldn't have been anything serious.  Never mind that the dog is hard of hearing.

And we fell back asleep.  But we are a family on edge.  My daughter swore that she was not up at 2:22 watching TV (although when she was little she would vehemently deny her TV watching habits) and I believe her... I think.  Part of me wants to believe she's still fibbing to me.

I'd give anything if I had originally had the guts to go talk to the car that followed me home that night.  I NEED to know why he did this and what he was trying to do to me.  But I will be happy if this incident goes away and never comes back.

As for the beeping and the blue flickering light ... well, there's always the possibility that our house is haunted and a few uninvited ghosts are dwelling among us.  Although it isn't Halloween.  There isn't even a pumpkin out in my front yard anymore.  Some Christmas lights, yes, but no pumpkin.

Come to think of it ... We'll just put Rick out in our front yard.  He'd scare anyone off. 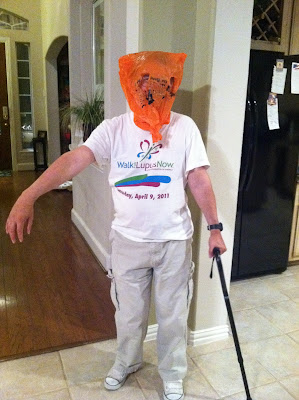 (This was his brilliant Halloween costume that he came up with one year.  I should've let him suffocate.  Then I'd never have to see that costume again.)
:)﻿
Posted by - Kris - at 11:38 PM