After caring for a sick husband for umpteen years, months, okay ... weeks ... and a sick kitty cat, well, it's my turn.  Yes, my stinkin' turn.  Came on me about three o'clock today and every bone in my body is aching. Every single one of them. I kid you not.

My husband felt so bad for me that ... he took a nap.  Woke up after an hour asking me to bring him a blanket.  Sure. Be right there, Dear.

Later he asked me for dinner and could I hurry because "Dancing With The Stars" was coming on soon..   Sure, Dear.   And would it be too much trouble to bring in the trash cans from the street?  It would. But I did.  I did a whole host of dishes and laundry, too.  Because it/they were there.

Know who was the most sympathetic to my plight? 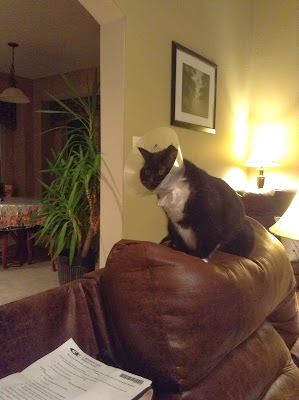 She offered me her cone.