See that cute little thermos below?

First, you need to know that I have a thermos fettish.  I do.  I still have an old blue thermos from my 20s with a very breakable glass insert ... that ... believe it or not, I carried all over the world with me because I wanted cool water.  And coke.  Cool coke.  That was back in the days when coke would not explode out of a thermos.  Still have it, tucked away in the back of my pantry and I would shoot anyone who tried to throw it away.  I once left it in a taxi in India and I cried.  Then I called the taxi company and arranged to have it found and delivered to my hotel in New Delhi.  New. Delhi. India.  Yep.  And, believe it or not, it was returned to me.

Fast forward to 1992 or 1993 or 1994.  My daughter Elizabeth was a few years old and attending a daycare where I worked.  Although lunch was provided every day, she wanted to be just like her BFF (yes I know that that wasn't a real term back then) and bring her lunch to "school."  Stupidly, I complied.  Hence the Winnie The Pooh thermos below. 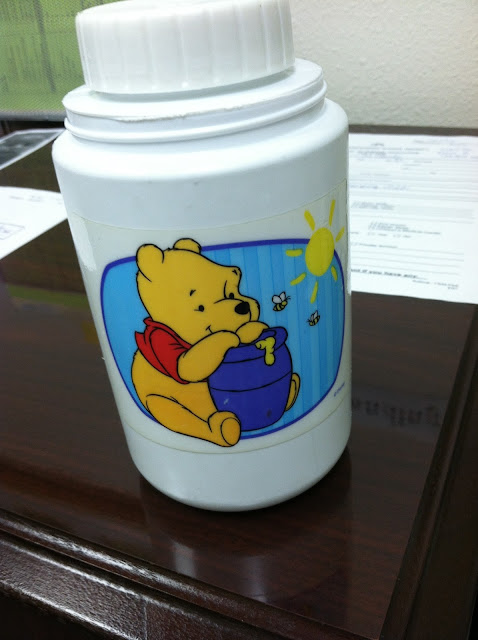 Now fast forward to any other day in the '90s.  Elizabeth was done with bringing her lunch to school, especially done with a Winnie The Pooh lunchbox and thermos.  I wasn't though.  It holds exactly 8 oz. and it's perfect for me to carry my milk in.  And I did.

And now fast forward to last week, the last day of school here.  I'm 55 years old and I still use this little Winnie The Pooh thermos to carry my milk in.

I'm feeling a bit pathetic now.  But wait.  The story gets worse.

I filled Pooh with my milk and since I didn't use all of it, I placed said thermos in our staff fridge.  Then school got out and Pooh accidentally stayed in the fridge.  I made a note to retrieve Pooh on our next work day.

By 10:30 am, when I checked, Pooh had vanished.  But surely no one would throw out a thermos!!  So I checked every cabinet, the dishwasher, even the staff lounge trash cans.  No Pooh.

I could not accept this.  I couldn't let Pooh just die a tragic death.  Pooh and I had been through so much together.

A few minutes later, I sent out an urgent email to everyone in the building, even though most folks were done reading their emails for the year.  Two people responded.  One smart aleck asked if Eeyore or Kanga had done it.  The other told me she'd seen the custodians cleaning out the fridge earlier.

Since this story's long enough, I'll jump ahead and tell you to picture a whole host of custodians ... and someone else we all know and love ... digging in the main dumpster out back ... just to find ... Pooh.

Pooh was found.  The funniest part of it all?  I forgot the custodians don't speak English.  Yet I had a whole conversation with them about Pooh and Pooh's history and probably even the history of all of my other thermos', too.  They were kind enough not to laugh at me.

I can only imagine what they are saying about me now ...

Oh, in case you were wondering ... even though Winnie baked out there in that hot sun before we were able to retrieve it ... the milk inside was ...