Class, we have reviewed 2013.  There would be a quiz except so much has already happened in 2014 that there's almost no time for an exam.  You think I'm kidding?

We closed out 2013 with first Elizabeth, then myself and then Rick all sharing an upper respiratory infection.  It pretty much consumed the entire last week of last year.  And ... sadly ... it pulled us into 2014, too.  That thing just wouldn't die!  Even our dog was sick.  Hers was a bladder infection, though.  She was spared the coughing and sneezing.  Elizabeth retired at 8:30 on New Year's Eve and Rick made it all the way to 11:30.  The dog was gone around dinner time.  I managed to stay alive until midnight but only because I was determined to watch that stupid ball drop down.  I hate that ball but I just couldn't forgive myself if I didn't watch it SLOWLY drop down the stupid pole to the stupid bottom.  Yep, I hate that ball.

Anyway, even though we all went to bed at respectable hours, the morning came very quickly.  Even quicker when you consider all the times I got up to check on Rick.  That's always a fun thing to do when he's sick and he's staying in a different room.  Yep, sure is.

So ... when 7:00 AM rolled around on New Year's Day and just as sleep was beginning to fit very nicely into my plans, Elizabeth knocked on my door with news that would rattle us both.  Rick was weak, on the floor, very confused and in need of some medical attention.

Yep.  That's how my New Year started off.  (I've had a few start off that way, actually, but I digress.)

We're cheap and $300 for an ambulance ride seemed frivolous so Elizabeth and I carried Rick to the car.  Then we drove like mad to the ER to get him some help.  And you know what?  He did indeed have an upper respiratory infection ... but more importantly than that ... he was suffering from a SEVERE bladder infection.  (You don't suppose he caught it from the dog, do you?)  And he was quickly admitted into the hospital.  Well, if you call EIGHT VERY LONG HOURS quickly.  Apparently there weren't any beds for him right away.  So ... eight hours later, he had himself a room.  The good part was that they made the decision to keep him very early on.  The bad part was that I'd planned lots of fun activities for the day and they almost didn't come to fruition.  Eight hours is a long time not to have any fun!!

So, uh, Happy New Year!  Rick is lying in a hospital surrounded by pretty nurses and I'm at home watching I Love Lucy episodes surrounded by pretty clothes, a Starbuck's drink and some shelving units that someone's gonna have to help me put together.  Well, you know IKEA. 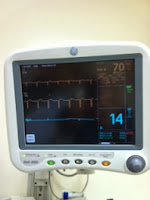 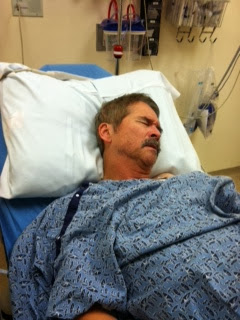 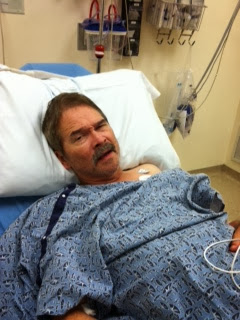 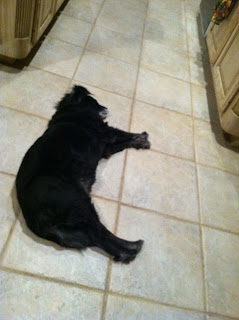 This camper is VERY happy, though.