my apologies to lindsey ... 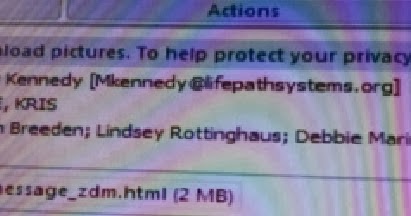 When my dear, darling daughter was born ... she was named Lindsey.  She was to be Lindsey Elizabeth Kahle instead of who she is now.  I loved the name Lindsey back then and I adored a girl named Lindsey that I had travelled with in 1979.  I had planned to call her Lynn, though, after a different girl that I was friends with in college (and still am today.)

But ... when she was born, she just did not look like a Lindsey.  Nor a Lindsay.  (I had never decided on the spelling.)  Not a freckle of her looked anything like a Lindsey and every time Rick called her that, I giggled.  I made him stop calling her that because it just wasn't right.

But I couldn't think of anything else to name her.  So ... with that in mind and with baby in hand, Rick said, "Then I'll name her.  I'm moving Elizabeth up and I'm giving her Courtney as a new middle name.  There."

Yep, that's how my daughter was named.

And given that info ... this name on an email I received yesterday made me giggle, too.  NO ONE should have to go through life with the name of ROTTINGHAUS!  Can you only imagine?

My apologies to the other three people show in that email there.  No apologies to Kris, though.  She loves her name...