My daughter is in for quite a surprise when she wakes up tomorrow morning.  Oh. Yes. She. Is.

I was just calmly sitting and watching the news tonight and all of a sudden I saw the lake next to my daughter's new apartment ... on the news!  Yes, the lake is famous.  Oh, and that's not all that's famous ... SO IS HER APARTMENT BLDG.

There's no denying that it's a pretty little area with the entire Shops At Legacy right out her door, but, no one knew it was this pretty.  So, what's up, you ask?

See this lake?  This cute little lake?  It's also in for a surprise tomorrow.  And by the way, that's Liz apartment building on the left, other side of the lake.  She's on the 4th floor.  I think I see her waving out her window. 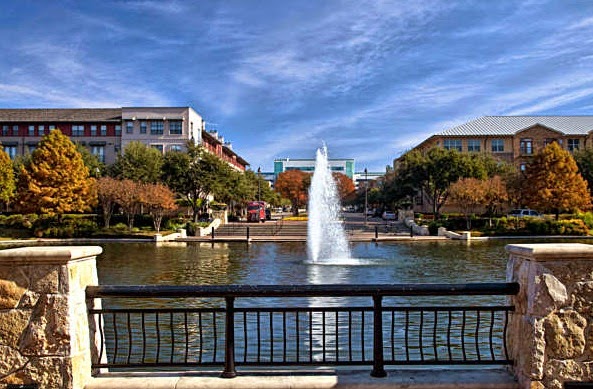 When I was last at Liz' apartment, the lake was beginning to look somewhat like a movie studio set.  There were sound systems and stages being set up all around. 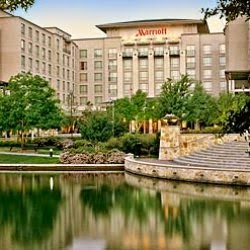 The little area with the steps was being turned into a stage.  Rick and I noticed all of the hubbub going on and asked Elizabeth if she was aware that her lake was suddenly very busy.  She'd noticed.  And she told us that the lake was hosting a concert ... for Toyota of Plano or something.  Toyota, the new kid on the block.  Even Frisco is all afritter over Toyota coming to town and bringing their headquarters.  I'm not quivering, though.  It's just a little car company, right?

Anyway, 'Toyotathon', as Elizabeth referred to it, was a little bitty concert that would be taking place on that there lake.

Fast forward to the news tonight.  The lake, the apartment, Toyota, people and more people and ALL OF CALIFORNIA I guess, is headed to The Shops At Legacy tomorrow for their annual convention.  Or their opening ceremonies or a simple staff meeting.  Not sure.  But I do know that it became newsworthy today and the Governor of Texas will be there, too.  Yes, even the Governor.  Good grief.  The Governor didn't show up when I came to town ...

Liz's itty bitty apartment ... that used to be so nice and quiet ... won't be, tomorrow.

I'll bet we'll be able to hear the noise all the way into Frisco.  I'll bet I will be anywhere else but at The Shops At Legacy tomorrow, too.  Or Frisco.  Or Texas for that matter.

And Liz knows none of this because she's already in bed asleep tonight.  Hee Hee!  She's going to wake up to a bang!  And see that Marriott above?  I can guarantee you that I will not be sleeping there tomorrow night.  I'm betting no one will be asleep in there.

I'm expecting a guest tomorrow.  I really am.