When last I was reported missing, it turns out that I really wasn't.  As usual.  I could be found working at a theatre every night, dressing the lead in a show and getting him onstage on time.  And that, believe me, is no small feat, either.  Billy is the lead in a simple little Friscoian show called "The Complete Works of William Shakespeare."  Scary title, right?  Don't let it fool you.  It's 100% pure comedy.  And 100% pure hilarity.  Three young men manage to do every Shakespearean play ever written in just one show.  I didn't want to work this show at all, having been so sick the week prior, but hey.  So glad I did.  And yes, they even let me cough once in a while.  There's so much laughter going on that no one actually hears me coughing anyway.

So, the show opens on Friday night.  On Saturday night, a storm hits us.  HARD.  And out go the lights.  Three young Shakespearean actors are on stage when all of a sudden, POOF.  Complete darkness.  It so happens that I had a flashlight just an inch or so from me and I got the brilliant idea to turn it on.  Like, duh.  And William Shakespeare continued.

Billy, our brilliant lead actor kept on going, never missing a beat.  He even came up with a new name for the show!  And he suggested that everyone pull out their cell phones and turn on the flashlights.  Everyone did.  And ... the show went on.

This is a quote I found on Facebook the next day:

"Shakespeare in the DARK. A quote from Billy Bestill at Saturday night's performance. The storm put the building in the dark and the audience and crew used their cell phone flashlights and lit the stage and the play continued. Great Job Guys!  What troopers!  Even ended with a standing ovation. You have to see this show!" 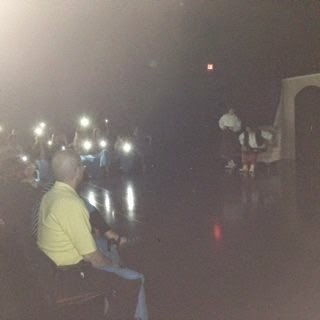 And that, folks, is what I've been up to ... and why I'm absolutely no closer to getting rid of this cold.