This conversation actually took place via my iPad and Rick's phone. Then Liz intercepted it and posted it on Facebook. But either way you see it, you have to know that the whole thing is a complete miracle. Well, not the wasp part. We could live without him ... but the Rick part.

This is from a man who was not supposed to live. Not supposed to ever walk again and was supposed to be left with the mind of a ten-year-old.  We never imagined him owning a cell phone and certainly not a smart phone. And texting was out of the question. 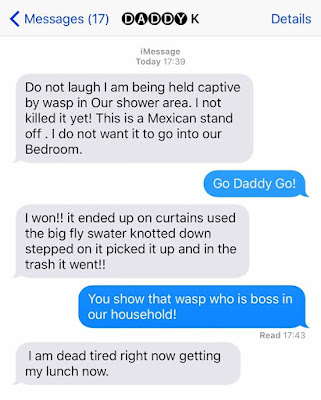 Lunch was had.  And a nap was taken.

And all is right in the world.