So, this whole California adventure idea began when I decided that I MUST, I JUST MUST take a trip from one side of the country to the other.  I've watched many (read: ALL) I Love Lucy episodes and since she rode on a train, well, IIIII had to ride on a train.   And she ate in a 'dining car' so IIIII had to eat in a dining car.

So on my bucket list it went.  One train trip to go, please.

I didn't actually take it from one side of the country to the other, but I did take it halfway across.  I planned it to take me home from California, all the way to Texas.  Far enough, I thought.   And looking back, it really was far enough.

We (because I drug Elizabeth along with me) boarded in LA at the famed "Union Station" on a Friday night at what was supposed to be 10:00 pm.  Yep, I drug my daughter to LA ... the pit of LA ... on a Friday night.  LATE on a Friday night, no less.  We stepped out of our Uber car and into a world of sketchy, sketchy people lining the sidewalks of LA.  At 10:00 pm.  Because we're crazy.

And once we entered the actual Union Station, well, it was a different world.  Restaurants, nice seating, etc.  I am no longer afraid of Union Station.  Just don't take me outside, though.  Different world out there.

We found (and this was not easy, especially dragging four suitcases behind us) where we needed to be and stood in line to check in.  Of course it was the wrong line.  Of course it was.  But we dutifully stood in it.  Eventually we were moved to a different line where we could check our baggage in.  It was also the wrong line.  But we happily gave up our baggage, hoping, just hoping that it would make it to Texas.  SPOILER ALERT: it did.

And eventually we were directed to a different hallway, up some stairs and into a little room for ... FIRST CLASS PASSENGERS.  Finally someone figured out who we were!  Just kidding.  It was a room for people who had paid for beds on the train.  I was one such person.  So was Elizabeth.  We needed beds for our three day journey.

Apparently ... some smart aleck had decided to commit suicide on some train tracks somewhere in California and it affected EVERY train trip in the country.  So our train was still sitting in Burbank and we were sitting in LA.  Great.  Fortunately the mess (pun intended) was cleaned up in a reasonable short period of time and Elizabeth and I boarded our train ... in LA ... across from a men's jail ... MEN'S CENTRAL JAIL ... at 11:30 pm.  Only 1 1/2 hours late. 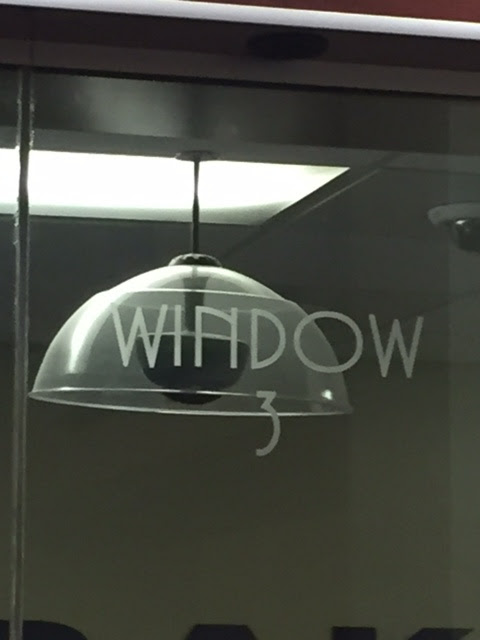 This was the wrong window.  No one was at it anyway, which should have been my first clue. 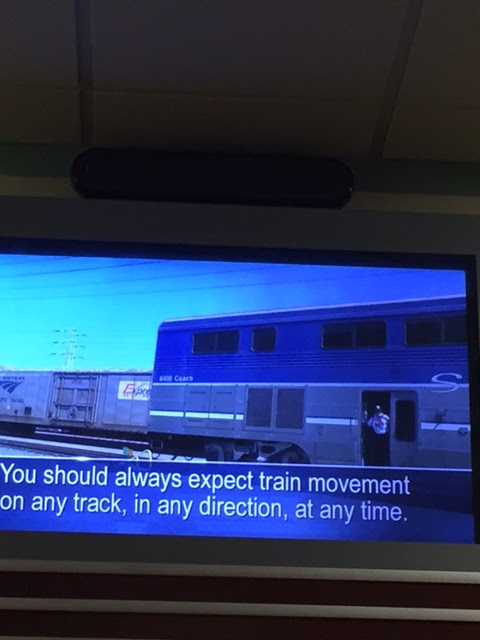 We had to be briefed, first.  And this was important information, I guess.  Trains moving?  Who'd of thought? 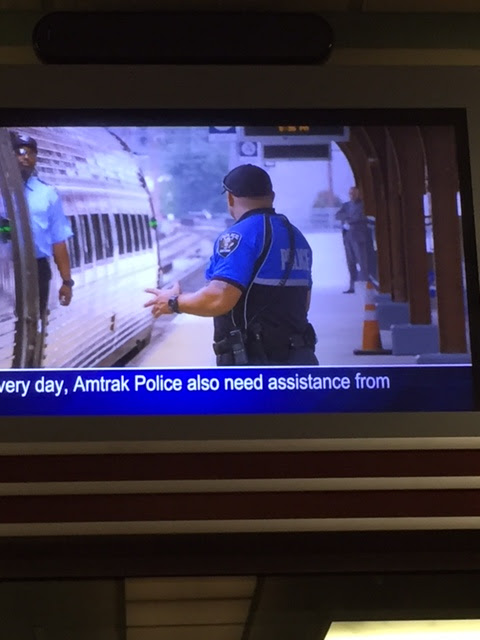 Oh, great.  Police have to be involved in my trip.  Must be because we left from downtown LA. 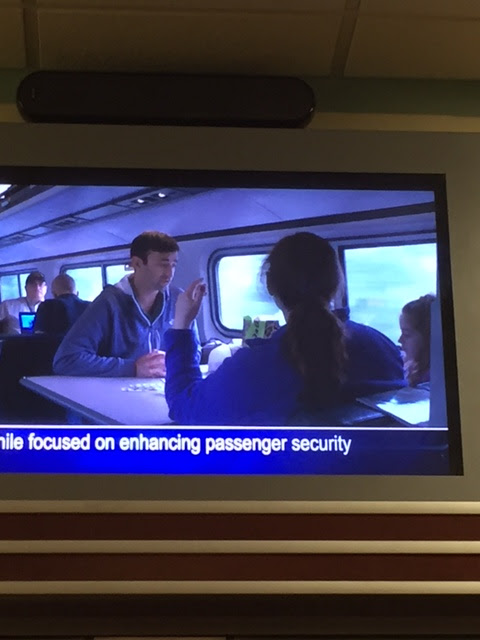 Hey, can I have a bigger window, please?  I want to see more than just a porthole's view ... 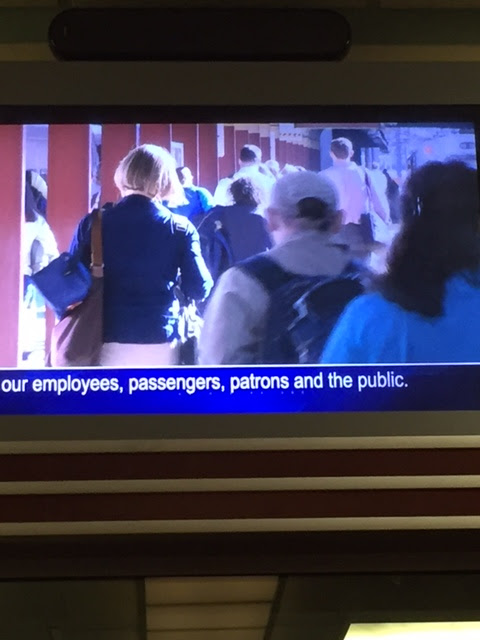 These people are in a hurry.  They don't know that there's a delay ahead.  They must not know about the suicide.  Slow down, peeps! 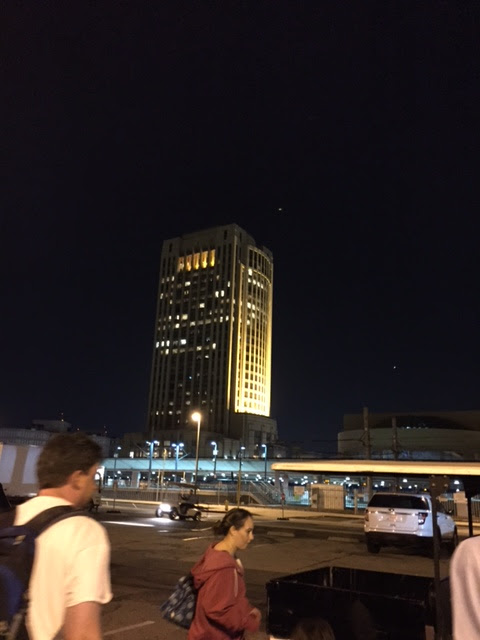 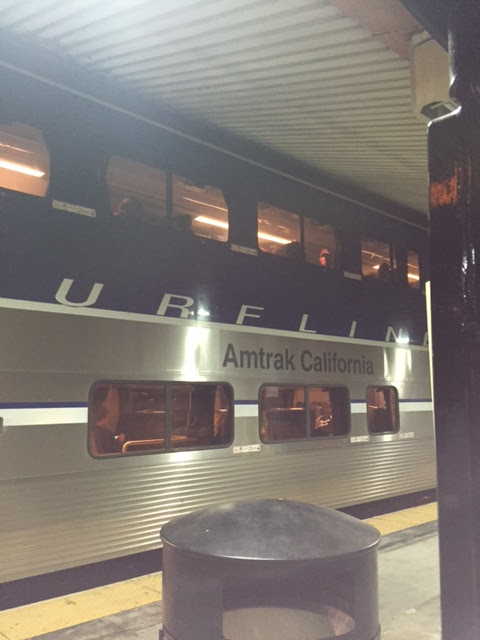 And finally ... boarding time.  Do you know that I never once made it downstairs?  I'm only just now figuring out that there's a downstairs to our upstairs. 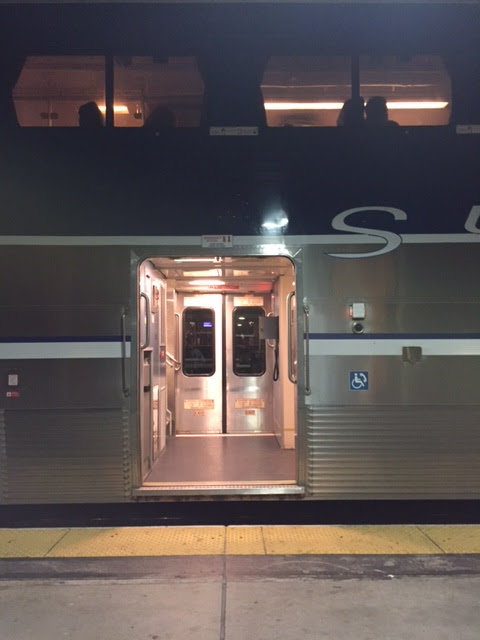 And ... it's time to enter.  These doors are actually quite pretty.   Wish the rest of the train were this pretty.  Wish I realized there was a downstairs.

Wish I'd never taken a train. 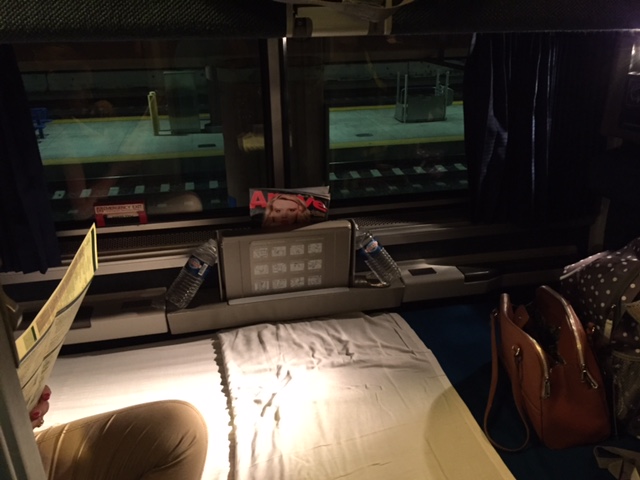 No, seriously.  THAT'S OUR ROOM.   That's my bed.  It was RIDICULOUSLY TINY. 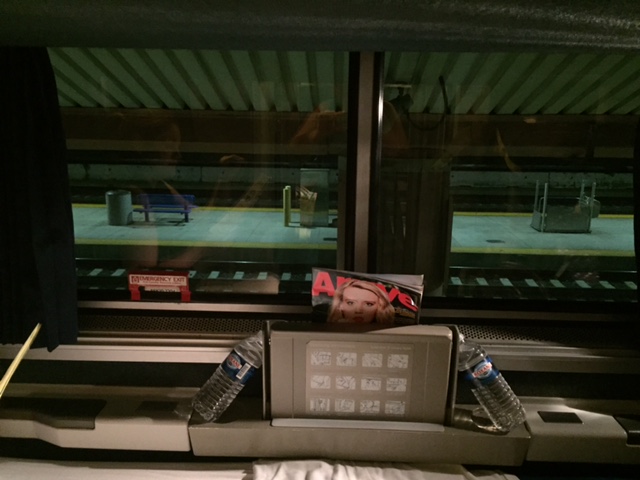 It did have a window, though.

Liz slept up above me.  Good thing, too, 'cuz there weren't no room in MY BED! 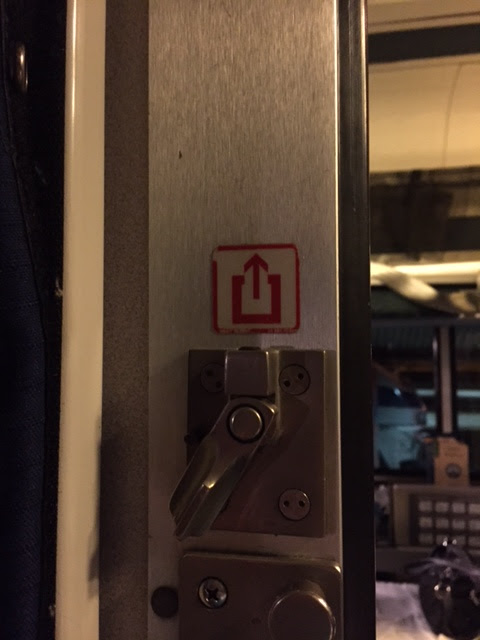 We did have a door on our room, though.  With a lock.  That made the room feel EVEN BIGGER.  Yeah, no. 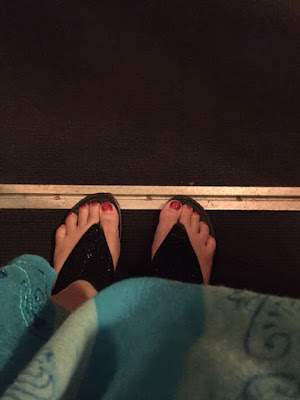 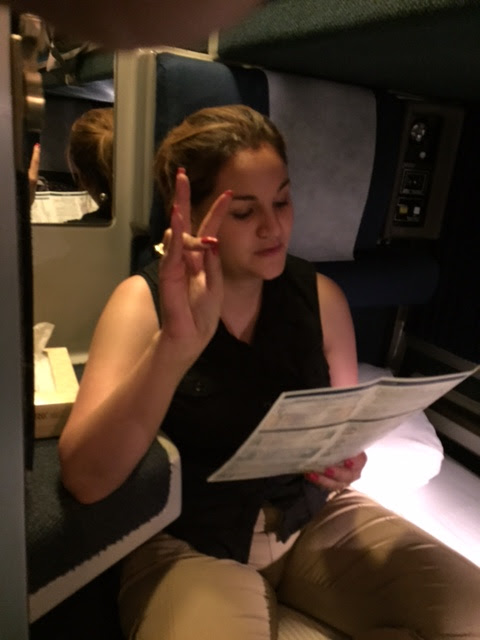 And, of course, Liz did the required study of how to get out in an emergency (what?  jump out?) and learned about oxygen masks and how to buckle a seatbelt.

Wait.  Wrong mode of travel.  Okay, so Liz read about the emergency exits.  I'm sure she read more to me but I was too busy trying to stay upright in my own room.