My husband turns 64 tomorrow.  He's THAT MUCH CLOSER to retirement age, although he's basically already retired.  The man hasn't worked since 1997.

Now, before you go thinking he's a bum of some sort, he ain't.  This man would be working if he had a choice, but he has no choice.  He just isn't able to work since his brain injury nearly 20 years ago.  AND ... it all started because he was a workaholic.  He literally worked himself to death.  Well, to near death anyway.

So, what does being 64 mean?  Besides being oh-so-close to 65?  Welp, it means that the Kahles have to think about moving now.  It's always been in the distant future but now we're within a year.  May I say UGH?

Rick was blessed to have been given $1810 per month for 'long-term disability' back in 1997.  That's a nice piece of change, yes ... but not when that's your only income and you're a grown adult with a family and a house.  So, yes, we were blessed.  But there wasn't much left over ever to save.

In one year - one year exactly, mind you - Rick will no longer receive that money.  It all stops at age 65.  I do not want age 65 to come any sooner than it has to.  I really don't know what we're going to do.

So, giving up our big ol' house in Frisco is not the problem.  It's a money pit anyway.  And it needs so much work done to it.  So, that's not the problem.  But finding an affordable place to live?  THAT'S A PROBLEM.  We'd love to stay in Frisco.  But that's a problem.  Houses here are not available and if you do find one ... and you are lucky enough to secure one before it ever hits the market ... then you will be paying an exorbitant amount for it ... and it won't be worth it.

Still not a problem, if you can find one.  Our current house will be worth more, too.  Although not in it's current money pit condition.  Anyone have an extra $100,000 laying around to fix ours up?

Surrounding areas are not much better and are offering homes that are WAY out of our reach, too.

So, I think I found a house for us. 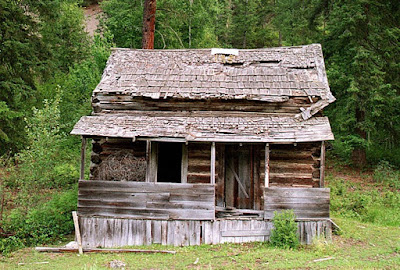 The housewarming party will be on his 65th birthday.  Bring your axe.