my greatest acting assignment EVER!

Sssshhhh, don't tell anyone, but I didn't do my job last night.

And I like all of the shows that I work up in Oklahoma, too.  I like the dinner they feed me up there, 'cuz I love pizza.

But what I don't particularly love ... is when my equipment fails.  Malfunctions.  Dies.  Kaput.  And last night it did.   The wand that I use to scrutinize  embarrass  torture scan folks before they step foot into the arena died.  It UP AND DIED.

And you know what my supervisor said? 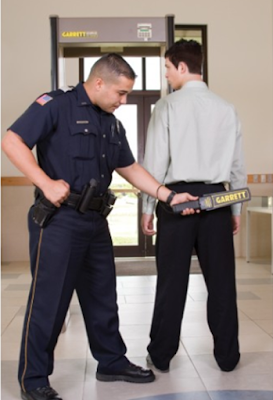 I spent two hours "wanding" basketball patrons before they could enter the stadium and I had to look like it mattered.  I had to pretend like it was beeping if something suspicious "alerted."  A coworker (remember, I like my coworkers) kept trying to make me laugh by making beeping noises behind me.  I no longer like my coworker.  I no longer like my job.  I'm going to Hollywood instead.  Because if I can pull that off ... AND I DID ... I am the greatest actress that ever lived.

I even caught a knife in someone's pocket.