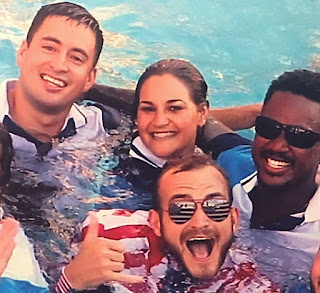 She's the one in the middle.  Upper middle.  I don't have any sons.

So, Rick is in pain.  Rick is in P A I N.  PPPPPPPPAIN!!!  Nothing new for him, though.  He lives in pain and he just grits his teeth and bears it.  Poor guy.

Every couple of years the pain is so extreme that we have to take him to the Emergency Room and beg them to admit him ... praying for the surgery, any surgery, that will ease his pain.  We made that trip in November (right before Thanksgiving) and we made that trip again last Thursday night.

Let me back up and say that Rick has been trying to get in to see a new spine doctor.  He wants NO MORE SURGERIES and he wants NO MORE REHAB/nursing homes.  So, he took it upon himself to find a new doctor that might give him some relief.  Oddly enough, he picked a doctor that is reknown in our area and, of course, impossible to get in the see.  Remember, this man is in extreme pain right now ... so being told that there were no more appointments in December was a big disappointment.  But he preferred to wait it out and just grin and bear it, again.

Fast forward to Thursday night when I took him to the ER.  I was prepared to beg for an admission to the hospital and also prepared to beg for the surgery that would relieve his pain, if only temporarily.  Rick hates the ER but agreed to go because he couldn't stand the pain any longer.  Tears are common for this trooper.  Seriously.  And that's how I knew he was serious.

So, once inside and checked into our ER bedroom, Rick tells his story and wouldn’t you know it … the ER doctor knows the guy Rick has been trying to get an appointment with.  She offered to call him on her cell phone, reached him, and moved his appointment up to the very next day, Friday.  THIS, the Kahle family has decided is an absolute miracle.

And the ER sent us home that night with explicit instructions as to how to get our appointment the next day.  Ask for Ashley, Ashley knows the story.  Etc., etc.

Since nothing ever goes as planned and since nothing is ever easy, we couldn't get the appointment the next day that we were promised.  I put THIS KID on it.  I was too frustrated. 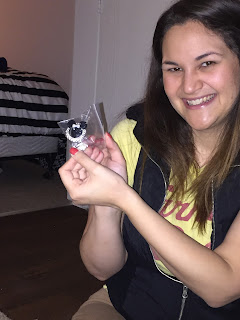 This kid did it.

Elizabeth grabbed the reigns; demanded to speak to Ashley or someone else just as competent and wouldn't stop until Ashley was found and Ashley was reminded and Ashley relented.  And ... she got him in.

The very day, Liz took Rick in ... and the nice doctor there said he wanted to try something new with Rick that he felt sure would work.  Fingers crossed.  Elizabeth got all of the info and it seems that Rick will have an object (some sort of monitor and pain medicine squirter) placed onto his spine and he’ll have a remote.  The jist of it is that this object will kill the pain and Rick can control the dosage until the nerve endings are fried/dead and no more pain is felt.  The pain’ll still be there, but he won’t feel it.  There’s also a battery in this pack-thing, but it will only lose 5% in 15 years, at which time, they can opt to replace the unit or let it go, slightly lessened in intensity.  He'll be 80 at the time so who cares?

The good part is … Rick will have a trial first.  A simulator-thingy will be placed on top of his spine on Monday.  It will very nearly mimic the results he’ll have after he goes under the knife and it’s permanent.  He’s excited about that.  We’re all excited about that.  Then, after Christmas, if all goes as planned and it works, he’ll get the real thing.  Not sure what kind of recovery we're facing but we're all still in favor of this thing.  And Rick is a new man.  He has something to live for!

Wanna know something funny?  This funky object-thingy will be able to give MRI results, as needed, anywhere in his body.  Yeah, I’ll believe that when I see it, but hey.

So, that’s it.  Here’s to some pain relief on Monday Dec. 18th!  And hats off to the gal above that got the ball rolling.

Now, if I could just kick my cold.  Maybe I can get a cold-killing-object-thingy placed on MY spine!