anyone seen the flashlight?

Four times my power went off.  The fourth time, it stayed off.

All of the neighbors came out of their homes (of course, everyone was curious) and it really was a pleasant evening, chatting with everyone, meeting new neighbors, asking if anyone wanted to buy my house ...  yes, I actually threw that comment in a couple of times.

Seriously, it was pleasant.  I've always liked catastrophes, though.

Most of the neighbors got their power back on within the hour.

MOST of the neighbors.

I, however, live on the street where the explosion happened.  I was without power for nigh on seven hours.

I was told to go find my candles and flashlights while we still had some daylight.  So I did that.  None of the flashlights had batteries and I only found two candles and no candle holders.  I was not worried, I had a phone.  Of course, the phone was nearly without power.  Okay, THEN I worried.

Sitting in the dark was ... quiet.  Rick was napping (he never knew what hit him) and the dog and I had literally nothing to do after we'd exhausted all of the fun of searching for candles and flashlights.  And the house just got darker.

Eventually, Kyndra, our upstairs tenant came home and I finally had somebody to play with.  I like Kyndra cuz she had a working phone.  With a light on it.  And she had a deck of cards.  We were ready to have some fun now!

There we sat, at my kitchen table ... looking something like this: 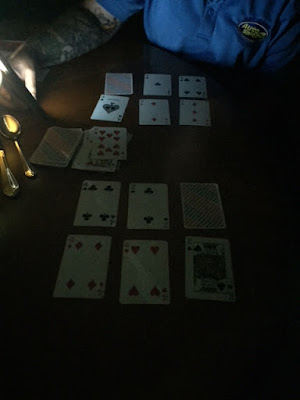 It was a pretty fun card game ... IF you could actually see the cards. 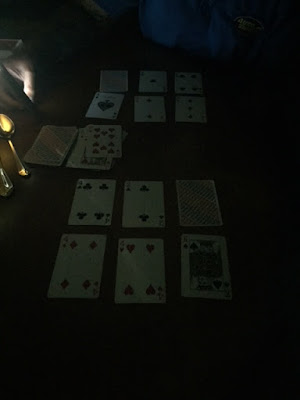 Kyndra's phone flashlight was fading ... and she suddenly discovered a way to make the phone shine a bit brighter.  She placed it under the dome of a cake plate that I had sitting on the kitchen table.

The room lit up! 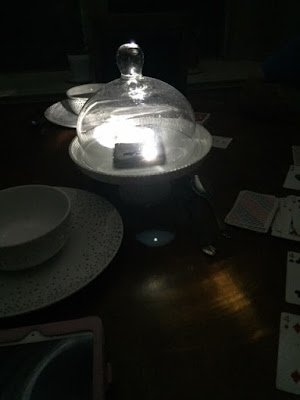 Well, not really, but it did make for some pretty interesting light pictures on the ceiling.

The lights finally came back on at ....
1:30 AM
when the whole house suddenly lit up very brightly.  Yeah, it's hard to turn all the house lights off when you have no idea which lights were actually on when the explosion happened.

I awoke to this the next morning, still sitting on my kitchen table. 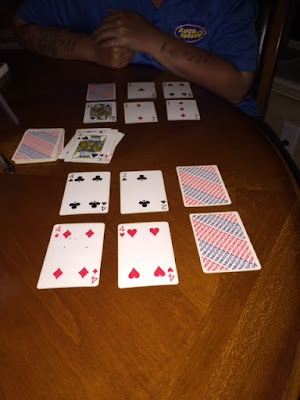 I have no idea what card game we were playing ...
but I did win.

No really, I was winning.