... and so much has happened to our little Kahle klan, most of it heartbreaking.

I doubt the details are as important as the fact that the Kahles are recovering and pulling themselves up by the bootstraps and moving on.  That truly is the most important part.

It's November now, the month that the Wedding of the Year was due to take place.  It will not be.  There's no more Ben ... in fact, was there ever a Ben?  Well, there was ... but not the Ben that we all wanted and hoped for and yes, even loved.  That Ben no longer exists.

There's still an Elizabeth ... and she's recovering.  She was hit (read: blindsided) the hardest by the cancellation of the wedding.  But she's in her own apartment now and starting a new life in Frisco, Texas.

There's still a Kris ... and she was hit hard, financially.  The apartment she signed her name to still exists along with a second one that she is downsizing to.  The invisible Ben never moved into the original apartment and the very visible Elizabeth now occupies the smaller one.  Nothing occupies my wallet anymore.

And there's still a Rick.  He sat back, watched it all unfold and just shook his head.  He's still shaking his head.  And his piggy bank.

But ... you know what?  We're just fine.  Elizabeth was shown a tremendous amount of love through all of this and so were we.  Our house is coming along fine and soon the holidays will be here.  I found my Christmas decor and I'm bound and determined to put it all up, all over the place.  I love me some Christmas decorations and I'm gonna smear them all around our house!

Ho Ho Ho!   Wait, Gobble Gobble!  Gotta get some turkey in me first.

Anyone seen my platter? 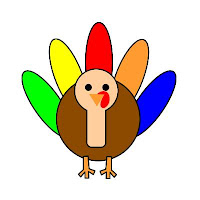