I survived! Yes, I really did.

And here's what all the hubbub was about... 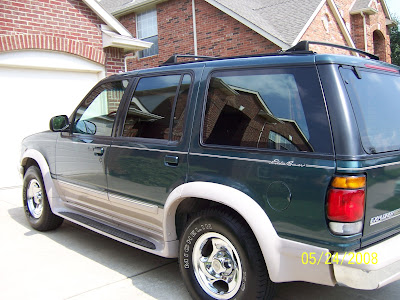 Meet Eddie. Well, that's what it says on the side of the car so that must be his name... 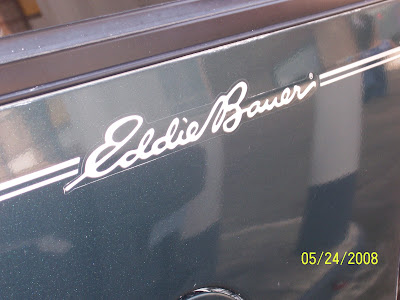 So, at noon today, under the guise of joining my cousin Dustin for lunch at Macaroni Grill, we managed to get Elizabeth there for a little surprise party. Elizabeth will turn 17 on Tuesday but today was the perfect day to host her party. Cousin Dustin is in the Army and is home on leave from IRAQ. Elizabeth thought we were going to visit with Dustin and hear his tales. Which we did... but 14 other people joined us as well, more to surprise Elizabeth.

Was she surprised? Well she would've been if I hadn't managed to spoil the surprise ONE MINUTE before we walked into the restaurant. But that's another story... and a painful one.

After lunch, we all headed back to our house... for the surprise. Yep, ol' Eddie Bauer was now magically sitting in our driveway. Just for Liz. With a bow.

And her comment when she saw the car? "Uh, who parked their green Ford Explorer in our driveway? How rude!" (Read that line with a snotty snarl in your voice. Yes, I taught her well.) 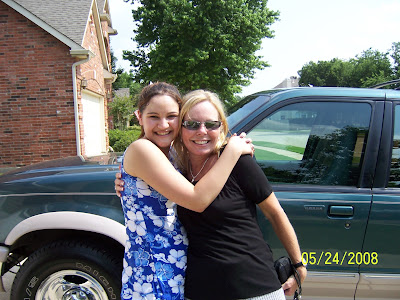 She was in tears. She has lobbied for this car for an entire year. And what she didn't know (and what I couldn't say here) was that we've owned this car for three months. THREE MONTHS! It's been hidden at my cousin Diana's house (thank you Diana!) and it was finally allowed to come home.

It's been the hardest secret I've ever had to keep... and the one secret that I tried so many times to divulge, unintentionally. Yep, I nearly spoiled this little secret, oh, a hundred times?

First up though? Getting gas. Not that Eddie needed it, but Elizabeth did need to take him out for a spin. 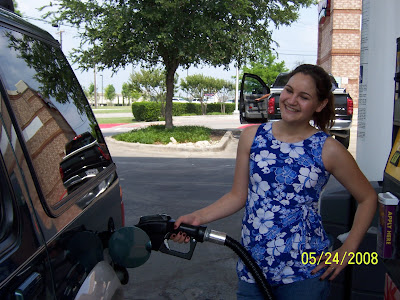 And would ya' look at those gas prices? I wanted Liz to remember what gas cost when she got her first car. Hopefully, it won't make us laugh one day... you know, "remember when gas cost only $4.00?" 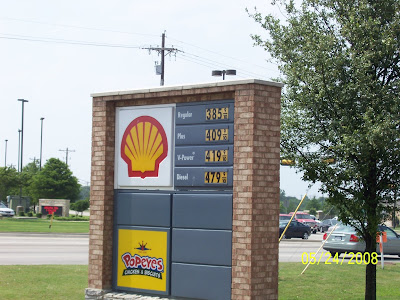 And remind me to never buy Diesel! 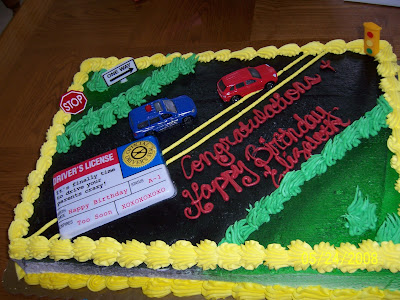 We then headed inside for a little cake and ice cream and a whole host of Eddie Bauer gifts/accessories for her new Eddie Bauer friend. I'm especially happy with the cake I found - you can read about that tale later... but in the meantime, that's Liz in the lead car, with Mr. Policeman right on her tail. Or wait... maybe that's me in the lead car. Getting pulled over. It would make more sense. It kinda looks like I'm running off the road. Yeah, that would be me.

Last year at this time, Elizabeth turned 16. But her Sweet 16 was not at all what a sweet 16 should be. Elizabeth and I were in California, cleaning out my mother's house when we received word that my mother had passed away. Instead of the idyllic trip to Disneyland that I was giving her for her 16th birthday, we immediately boarded a plane back to Texas. Yes, her birthday was interrupted. Big time. I vowed that I would make it up to her on her 17th. I sure hope I did. 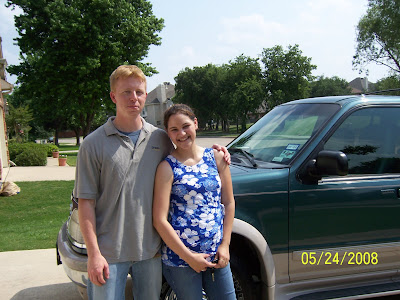 And this is Dustin. And Liz. Oh, and Eddie.

Great story and pics. We're so happy to have been part of the surprise.