.
Big things are happening at the Kahle's today. Yes they are.

Our realtor is taking down our sign. Yes she is.

No, not really. I hated it.

But the shoe was cute.

Anyway, we were supposed to acquire our new home on May 28th. But B of A (I love them) said basically that I was unimportant and would have to wait until June 10th... because other people were more important than me.

June 10th came and went and when I questioned it... I learned that a lien had been discovered against the house we are buying. A big lien. BIG LIEN.

Briefly I thought, "there goes my dream house." But at that point it didn't matter... because B of A had so much as said, "I don't like you. You can not have a loan until July 23rd when YOUR house sells. And not a moment sooner."

And I thought, "well, that doesn't matter... because there's a large lien on the house I want and I'm not sure it'll be lifted by July 23rd anyway."


And I rode it out... and it's a good thing that we were so agreeable... because when things got all ironed out and the lien got lifted, paid off, whatever... I got notice that we needed to move OUR closing date up to the VERY NEXT DAY. And the stars just had to align on this.

They had to, or else.

The house on Creek Point, the house I wanted to buy HAD to be closed on July 7th. HAD TO. Had to or the seller of that house would not only lose the house SHE was buying but would lose whole bunches of money that somebody was keeping... or something like that. I was never clear on that one.

But I still couldn't make it happen. I just couldn't.


My agent said,"You will lose your earnest money and/or you will get sued."


By the way, I'm not sure how earnest money works in other states, but in Texas you write an initial check with your offer that basically says This Is How Much We Are Interested in Buying Your House. Usually about one percent of the asking price. And if everything goes like it's supposed to go, that check is released the day of closing and is applied toward the price of the house.


And so we hemmed, we hawed, we begged, we pleaded, we crawled, we grovelled... and the seller of the house on Creek Point remembered how we couldn't close on the dates that she wanted... because of the nasty lien...

... and she relented. She gave us the date of July 23rd!! We had given her the time she needed... and darned if she didn't turn around and have to do the same for us.

And the planets aligned. 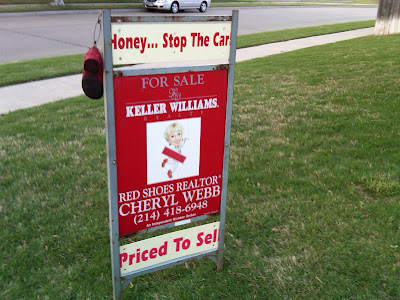