.
We went away for the weekend, to Norman, Oklahoma, to watch OU slaughter the Air Force Academy. Fortunately, for Rick's sake, it wasn't the slaughtering that we had all expected. In fact, it was a very close game. Only 3 points separated OU's win from AF's loss. Nothing to be embarrassed about.

Rick was in love with the entire weekend. He has been counting the days until we went on this little excursion to see his beloved Air Force get annihilated. I mean, do their very best.

I love that Rick loved going. I also loved that he loved getting out, getting to go, etc.

I fell in love with something else this weekend, too. 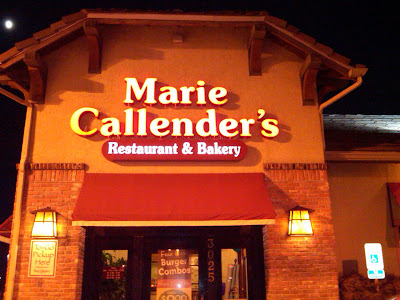 The moment I spotted this restaurant, just minutes from our hotel, I knew where we'd be eating dinner on Friday night, if not EVERY night that we were in Norman.

We both LOVED Marie Callender's in California. From the cornbread and honey butter to the wonderful salad bar, to the meatloaf seasoned just perfectly to the endless assortment of pies that no one else on earth offers. And I cannot forget the oh-so-wonderful-potato cheese soup. There is no comparison.

Yes, we have missed Marie. She is not in Texas... or at least not that we have found.

So, off we went. To visit Marie. Not 30 minutes after arriving in Norman.

And I just knew things were not going to go as planned when I saw this: 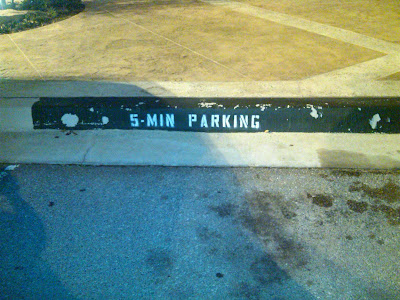 Seriously? 5 minutes? Like ANYONE can eat at Marie Callender's in just 5 minutes!

But you know what? After my visit to Marie's... I wish I'd heeded the 5 minute warning.

The salad bar was lean. In item choices. Rick ordered ribs and when it was time for our food to be delivered, the waitress very calmly announced that they were out of ribs. They were out of meatloaf, too. Too bad they weren't out of chicken fried steak, which is what Rick wound up ordering. Apparently it would've been better if they'd served Rick the invisible ribs. At least we would have been eating at the same time.

I had the salad bar with the potato cheese soup... and alongside that lacking salad bar was the soup... but it was not the soup I remembered. It was liquidy. The potato cheese soup I'd always known from Marie was thick and creamy. I began to eat it anyway, but I felt the need to ask the waitress if this was just the way the soup was made in Oklahoma or was this just bad soup. Her answer: just bad soup. She said, and I quote, "Wow, that shouldn't be that way."

She then went on to tell me that the soup was made in the morning... and since they have a brand new cook, well, maybe he just didn't know what he was doing. That was comforting. And I stopped eating it immediately.

Although I had driven us to Marie's because their pies are the best... we both just skipped it. They were out of almost everything I would've wanted anyway. So why bother? It had probably been baked in the morning by the new pie baker who probably didn't know what he was doing, either.

At least they gave us a warning.

All was not lost though. We did have this gorgeous sky overhead when we left. 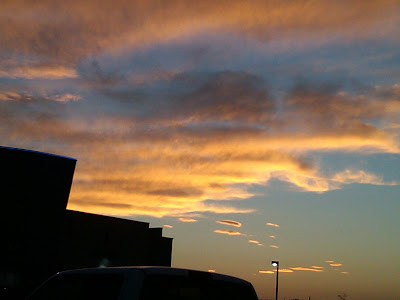 I stared at it for more than 5 minutes.