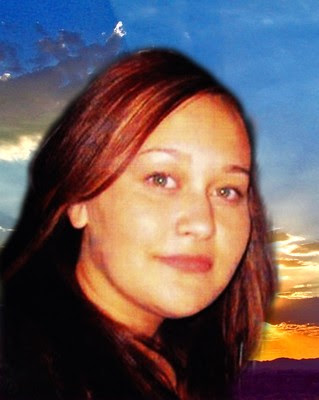 This is Elsje....
When Elsje "Elizabeth" Erin Maree Stutsman walked into the room, those in her company felt energy, an enthusiastic spontaneity. This was just one example of who Elizabeth was and how she impacted those around her. Elizabeth was a clever and gregarious person who always sought out the finest attributes in other people. It was as if Elizabeth wanted to share all of their experiences, revel in their lives and celebrate their discoveries. Elizabeth was tireless and had boundless enthusiasm that would serve her well throughout her life.

Elizabeth was born on October 19, 1989 in West Covina, California. She was the daughter of Darrell and Vicci Stutsman. She was raised in Las Vegas, Nevada. Always at the ready with a good joke, she grew up to be quite a humorous person. While some who knew Elizabeth might describe her as an idealist, she possessed good common sense.

As a young girl, Elizabeth was able to empathize and identify with a vast array of people and personality types. This quality drew her into a diverse group of friends and acquaintances. Elizabeth was intelligent and had little trouble getting along with other people. Elizabeth took part in soccer; which she also enjoyed coaching.
With a talent for making acquaintances easily which in turn brought her an endless stream of friends, Elizabeth was very sociable and could blend without effort into any social group. Assertive and outgoing, Elizabeth was easy to know and demonstrated a deep concern for others. She always seemed aware of what was going on with people around her and throughout her life she made many, many friends.

Elizabeth was uplifted by new ideas and was excited by life’s possibilities, traits that made her an exceptional worker. Her primary occupation was dancing.

Elizabeth Stutsman passed away on November 16, 2010 at Desert Springs Hospital in Las Vegas, Nevada. Elizabeth fought a brave battle against a heart condition. She will always be Mommy's Baby Girl and Daddy's Biffy.
.
Posted by - Kris - at 11:55 AM