I tried and tried and tried to rent a hybrid for our road trip.  No one is "green" anymore it seems.  But I did find one... and was promised it on Monday.  We were scheduled to leave on Tuesday so it sounded promising.

Monday came and went.  No car.  The previous renter still had it out.

Then we were promised it on Tuesday by noon.  We considered waiting for the hybrid, but decided it was too risky.  What if the previous renter really liked his hybrid and decided to kidnap it to places unknown?  And besides, we really really wanted to get on the road earlier.  So, we opted to rent a different, smaller car from our local Enterprise in Frisco.  Of course, they were out of small cars.  They were out of medium-sized cars.  We got ourselves a V8!!!  (The exclamation points are intended to show anger there... not glee.)

Yes, we wanted a hybrid to save on the cost of gas.  Instead we are driving a gas-guzzling, super-charged, hyper-powered, knock-everyone-else-off-the-road, V8 Dodge Charger.

It drinks gas.  It has gas for dessert.  But off we went.  We had no other option.  And at 7:25 pm, I still have not heard from the dealer that owned the hybrid.  I'm glad we didn't wait.

And seeing as the little light that mysteriously showed up on our dashboard illuminated a picture of a skidding car with long tired tracks behind it ... I panicked.  I mean, WHY WAS THE DASHBOARD TELLING ME TO SKID????

When I caught on to what she was doing, she claimed that she had known all along what the light meant.  Because she had ESP.  And I didn't know what was going on because my ESP was off.

Yes, Liz had the power to turn her ESP on and my ESP off.

I hope she can tell what I was thinking the entire rest of the ride to our stopping point for the night ...  and if she can ... well, my ESP ain't off after all. 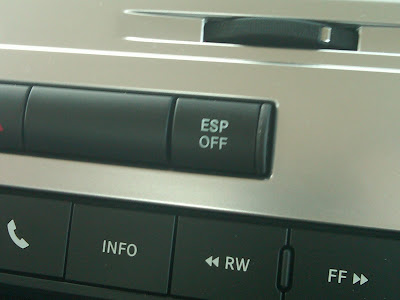