Headed to a "bridal party breakfast" at 9:00 am (I was actually up at 6:00 am because I'm all screwed up timewise) where the bride and groom actually made an appearance.  This is Amy and her mother (my cousin Marilyn) on Saturday morning.  No photo of me because I did NOT look that good at 9:00 am the morning after. 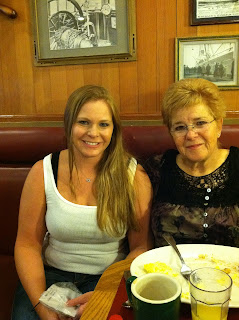 At 10:30, I met up with Karla again ... for ... a shopping spree!  Because it was there?  Yeah, that's it.  We found us an outlet mall and shopped our brains out until 12:00.  I had no business buying the black winter coat that I did.  I had no business buying the bulky black sweater that I bought, either.  I also had no more room in my suitcase to carry them home in.  I decided to pull an Ann Frank and wear all my clothes onto the airplane the next day.  Or ... I would just worry about it later.
Got on the road at noon ... 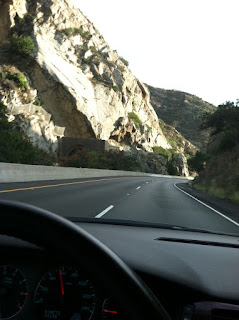 ... and even found a moment to spare (found a few tidbits of insanity, too) so I headed back to Jenny's house in Santa Maria to have lunch with her.  She had other intentions.  She hauled me off to a dog park.  Well, Bertie did the romping.  But I did wonder why she rushed me off to a dog park.
I'd never been to a dog park before.  I thought dog parks were silly because dogs don't typically like other dogs.  I was very wrong though.  At a dog park all dogs like each other.  And they love romping together.  Dog park mommies are a crazy bunch, too.  They all meet up and catch up on the latest doggy gossip.  And they leave there making arrangements to bring the "kids" the next day, too, at the same time ... so they can play together.
If I hadn't seen it with my own eyes ...
Here's something else I saw with my own eyes ... a rainbow.  God's promise that He would never flood the earth again.  This rainbow was a little bit different though.  It came before the rain.  I wonder what that means? 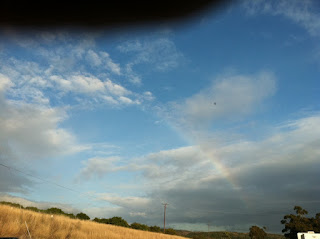 So, as I passed through Buellton, feeling that there was rain on the horizon, I decided that I hadn't seen Solvang in a long time.  Two years, to be exact.  Not all that long, but when you are three states away, two years feels long.  And so I stopped.  And I bought fudge.  Because it was there.  Because it hadn't rained yet. 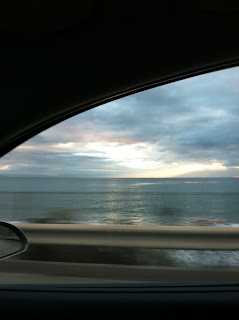 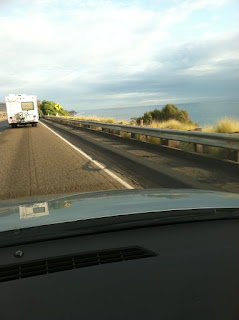 Sunny again and mission completed with the toe-dipping and the fudge-eating, so I was on the road again.  Why I took this next photo, I have no idea.  Because it was there?  Not sure, but I sure was whizzing by.  Why is that truck in the water?  ﻿ 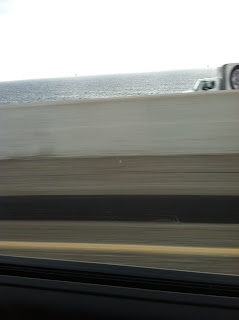 Many hours later, I approached Burbank where my hotel was for the night.  And since it was on the way to my next stop, I stupidly decided to head to my hotel and check in.  Because I had one minute to spare?  Or I was completely crazy?  The latter is true.  Because once there, I changed into my "show attire" and realized I now had only one hour to get to downtown LA.
But I drive fast.  I could do it. 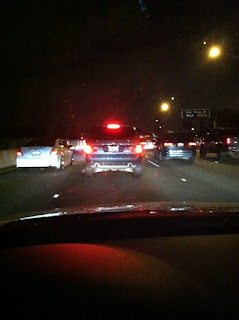 
Just in time to get my ticket and head in to see: 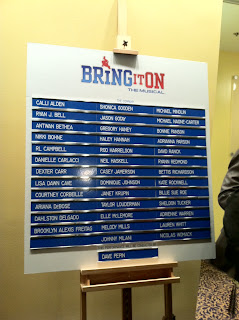 ... my little cousin Courtney performing in "Bring It On - The Musical" at the Ahmanson Theatre at The Los Angeles Music Center.
Was it good?  It was PHENOMINAL!  To all my California friends ... do not miss it!  It's a feel-good play, if ever there was one.  You have five more weeks to get a ticket. 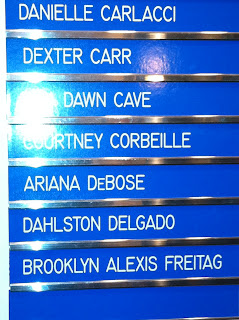 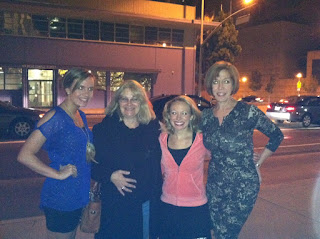 Here we are after the show.  Chandler (Courtney's sister), me (rain and my hair just do not get along), Courtney and Judy (their mom, my cousin).  One of us is wearing a new black coat she just bought at an outlet mall in Pismo Beach.  The rest look normal on that not-so-chilly-night in Southern California.﻿ 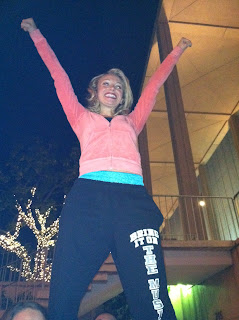 Here's Courtney, up close and personal.  She's standing on Chandler's arms.  Because she can.  Because it's what she does best.  I tell you that girl is made of rubber.
After a midnight dinner at Cafe 101 in Hollywood, I headed back to my hotel.  'Cuz it was now about 3:00 in the morning and because I had a breakfast to get to on Sunday.
This was the oh-so-gorgeous view that I was awarded at my hotel in Burbank.  Because they knew I was coming.  Because this is the view that I ALWAYS GET ... no matter where I go. 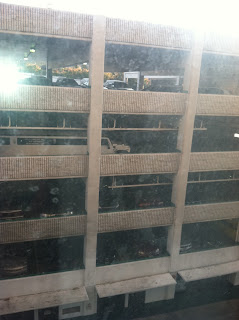 Harumph.
But before I head myself to bed for the night ... I just have to include a little video here.  It's of Courtney, the rubber machine, herself.  You can catch a glimpse of just what this girl is made of.

But how many people can say that they actually have a job doing what they do best ... and what they absolutely love?  Courtney can.  And I SO can't wait to see "Bring It On - The Musical" when it comes to Dallas in February.  Yep, I'll be there.
.
Posted by - Kris - at 10:25 AM