Chillin' at the V.A.

The military man pictured here was denied his pension from the Air Force.  It was a ten year battle... and the ruling came down last week.  DENIED.
There's a new word in my vocabulary though.  APPEAL.
And we started that process today.  Below is a shot of Rick in the waiting room of the VA office in Plano.  Yes, the Plano that's NOT 242 miles away from Frisco.  Thankfully. 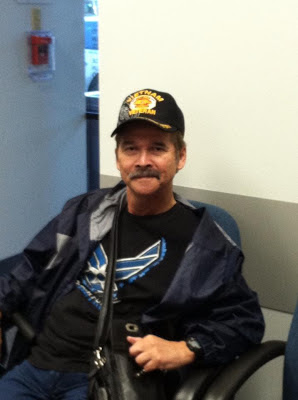 The people we dealt with today were actually lovely and very willing to try to help us... but there was one incident that had me wondering.
Man at VA Office:  We have to prove that Rick was diagnosed with Lupus prior to being released from the Air Force.
Me:  I can prove that.  He was diagnosed in 1992 and released from the military in 1994.
Man:  Yes, but can you prove it?
Me:  Yes, here's the doctor's letter explaining the diagnosis.  It's dated April 1992.
Man:  But we need a letter with this information dated before his release in 1994.
Me:  Uh, 1992 IS before 1994.
Man:  Yes, I know.  But can you prove it?
* * Blink Blink * *
Me:  Okay, how about this?  See this Medical Discharge order?  It's dated 1994.  And it's called a MEDICAL discharge.  Therefore I profess that he got it because he was medically discharged.
VA man looked confused.  But eventually I saw a lightbulb come on over his head...
And so the appeal process begins.  And we have homework to do.  We have to petition every stinkin' doctor that we know to write a letter stating that Rick's Lupus was most likely caused by having been sprayed by pesticides in Thailand during the Vietnam War.
Easy peezy, I'm sure...
And here goes another ten years of my life...
.﻿
Posted by - Kris - at 8:53 PM