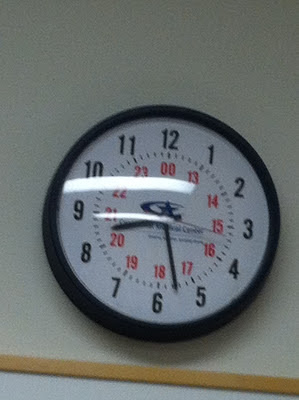 Yep... the clock just ticked away that morning... and surgery was still so up in the air that we had no idea if Rick would get his new back or not.  Even the surgeon kept saying, "I will only do this surgery if it's safe."  Which I respect, but still.  Do the dang surgery, Doc!  The man wants to walk again!  And besides, I need my errand boy back. 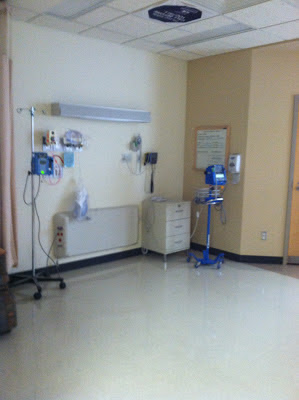 As I let on earlier, the surgery did eventually happen, 2 1/2 hours behind schedule.  But, alas, it did happen.  And all was right in the world, until ...
... we all met in the little conference room at 3:00  with the surgeon.  He only had good things to say about how it all went and we were very happy and very relieved.  Then, all of a sudden, an overhead loud speaker called out his name and sent him flying.  Since we were not done chatting with him, we assumed he'd be right back.  Or, at least that he'd stick his head back in and say something, anything, to the effect of, "I'm sorry I've got to cut this short..." or "I've got an emergency and I'll chat with you later..." or "Stay right here, I'll let you know what to do next."
Nope.  Nada.
He just up and ran.  He left his orange juice behind so we knew he'd come back to us.
But he never did.
So we waited and sweated and wondered exactly what caused him to bolt out of our little room and back towards the operating room.  What on earth had happened to Rick?  We had been told that Rick was now in recovery so what?  Did they have to rush him back into the operating room?
TELL US!!!
I finally had to go ask the concierge for help.  Were we waiting in that little conference room for nothing?  We will never know.  But the concierge placed us in a new room now.  The surgery waiting room and told us it would be 30 minutes until Rick was out and in his own room.
THREE HOURS LATER... 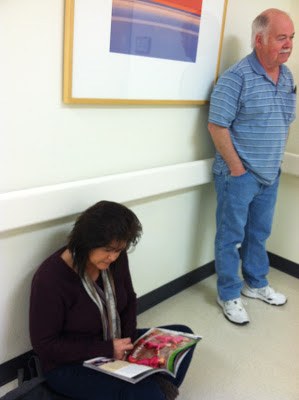 We waited.  And waited.  And... uh, waited.  Out in the hall.  Because that photo above this one is of his room and it wasn't all that exciting without him in it.
I did find this in that hallway.  I thought it rather amusing... 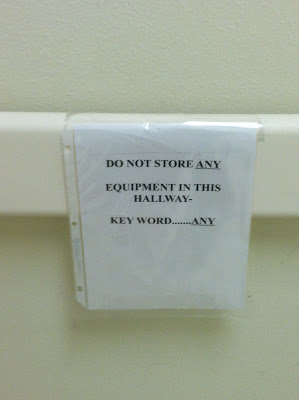 However, this was parked just a few feet from it. 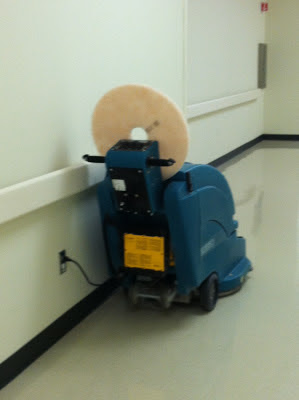 Yeah, signs don't mean anything in hospitals, either.
We did see Rick eventually, but he was pretty haggard and worn out from the surgery.  Can't say as I blame him.  We only stayed a few more minutes after that because ... why.  Rick needed the rest and honestly, so did we.  4:00 came very early that morning.  And by 6:00 pm, we were ready to call it a day.
I drove home... and found this. 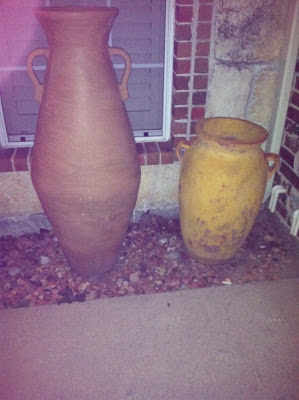 Can't quite decipher what it is?  Not to worry, you'll get full details on it tomorrow.  Because, I love cliff hangers.  And I'm still still hanging on the edge from this...
;)
Posted by - Kris - at 1:30 PM