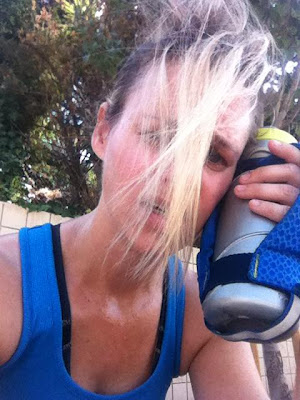 This is why I don't run.
This is Andrea.  A buddy of mine.  She is OBSESSED with running marathons, half marathons, tracks of any kind and just running wild in general.
But see the photo above?  Even she was a bit surprised at it.  Read what she said about it...

This is what 18 miles looks like. I have resorted to singing aloud to my music in an attempt to keep my spirits up.  Around mile 16 I caught a glimpse of myself in the reflection of a parked car window, and the image reflecting back startled me: I look like a crazed woman.  I'm *acting* like a crazed woman.  I'm singing in the middle of a street.  I'm trespassing on neighbors' properties to run through their sprinklers.  I rub my feet with an actual stick of deodorant in order to prevent blisters.  I'm running the same quarter mile stretch over and over simply because I'm that desperate for a consistent stretch of shade.  I've developed an intense hatred of small dogs, particularly the yappy poodle I had to outrun UPHILL at mile 10 and the damn Yorkie that chased me at mile 15.  At one point, I sat on a curb and peed in a gutter (I am not proud).  People, it's official: I've lost my damn mind.  What’s the definition of insanity?  Doing the same thing over and over?  Lol.
*
And this folks is not only why I don't run, it's why I'll never run.  Well, that and the fact that I HATE to run.  I prefer a nice slow saunter.  Okay, not really.  I prefer a couch with a marathon on the TV in front of me.
Okay, skip the marathon ... I prefer an I Love Lucy episode on that TV in front of me.  And a remote in my hand ... and a cherry limeade in the other.
Are the brownies ready yet?
.