Good grief!  I've been through you know what and back!  The blog broke, disappeared, jumped up and did some twists and landed flat on its face.  I've had to teach it some new tricks, some first aid techniques and I had to put a few bandages on its knees.  Yes, those knees were quite scraped up!

When last we chatted, I had gone on a little road trip to take Rick for a FULL exam for agent orange exposure.  We got our knees bruised on that trip, too.  Rick was put through a battery of tests and then told he might get 30% of a pension.  His eyes brightened but we are smart enough to know not to put any stock in that thought.  We will continue to fight the good fight though.

Then, I believe Thanksgiving happened.  But that paled in comparison to the 4 days of ICE, ICE and more ICE that we had visit us during the first week of December.  I directed a play and, of course, the performances were to be during that blasted ice storm.  Oh we got the play up and running but not without a ton of headaches to recoordinate every performance, make sure every actor was available (and not all of them were) and reorder catered food from ANY restaurant that happened to be open during the ice storm.

Here's what we were dealing with ... 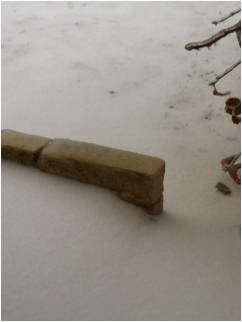 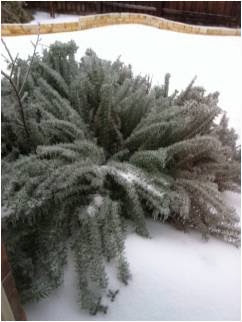 This was looking out from my kitchen window.  Imagine trying to fool your dog into going outside onto this.  I had almost convinced her it was snow (which she likes) until ... she stepped on it ... and slid clear to the fence.  Once I stopped laughing ... well, okay, I'm still laughing. 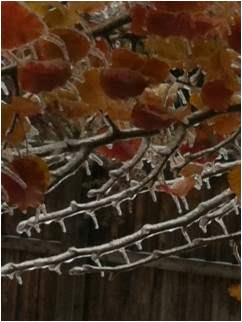 Everything that could freeze ... did.  That's ice hanging from a tree outside my window.  That's also ice sitting on top of each branch and leaf. 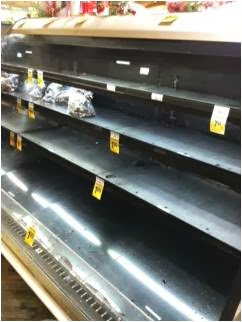 The grocery stores, when we finally could leave our houses four days later, were bare.  Folks here are smart and stock up.  Kahles, however, are not that bright and tried to go shopping AFTER the ice storm.  Above is the fruit section of the produce department.  I dare you to find an apple or a banana there. 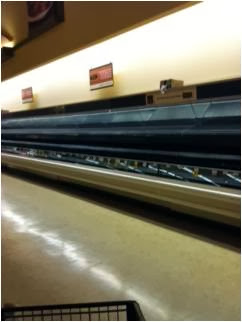 This is the meat section.  Not a stitch of meat to be found.  NONE.  I put this photo up on Facebook and a friend of mine told me it looked like a war zone.  And you know what?  It did!  I was never so thankful for canned goods in my life!

And, now that the ice storm has passed and we are enjoying nice 70 degree days again ... yes, 70 DEGREE DAYS! ... this is still sitting on my patio.

Really?  70 degrees out and this refuses to melt ... TWELVE DAYS LATER! 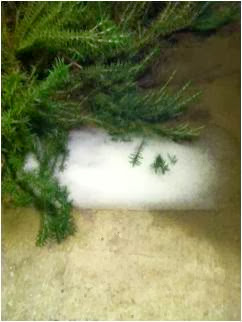 Oh well.  The dog just steps over it.

That's us for the last month.  The blog is here to stay.  I'm so sad and sorry that I lost it briefly.  But let's pretend that never happened.