Although I don't watch Duck Dynasty, I'd  have to have my head in a hole to not know what's going on over there.  In short, one actor spoke out against gays.  Or so I was lead to believe.  And thus he was removed from his hit television show.  It turns out that he was merely pointing out that we are all sinners and yes, homosexuality is a sin.  Oh how the left-winged folks would love to believe that it isn't.  But, yes, it is.

So how do I feel on the issue of gays?  Well ... some of my best friends are gay.  In fact, my VERY best friend was gay.  I could go on and on but, in short, I love the gay community.  Pretty much always have.  And yet, I would be the first to agree that homosexuality is a sin.  So is premarital sex.  It does not matter that said lifestyles are widely accepted now.

Elizabeth found an article written by a gay person who stands up for the rest of us and our rights to our feelings, beliefs and our opinions about homosexuality being a sin.  Thought I'd share it with you.  I know I'm sticking my neck out here ... but I like this guy.  I have a friend that will most likely be unfriending me on Facebook ... but I wanted to take a moment to clear some heavy air.  And remember, my best friend was gay.  She is not with us anymore (she passed away in 2009) but she shared a lot of opinions and views with me during her lifetime.  I understand being gay better than most people around me.  And I understand everything she went though regarding her lifestyle choices.

So, as we enter 2014, I have a million and one resolutions to uphold.  Tolerance is high on the list.  But so is standing up for what I believe in. 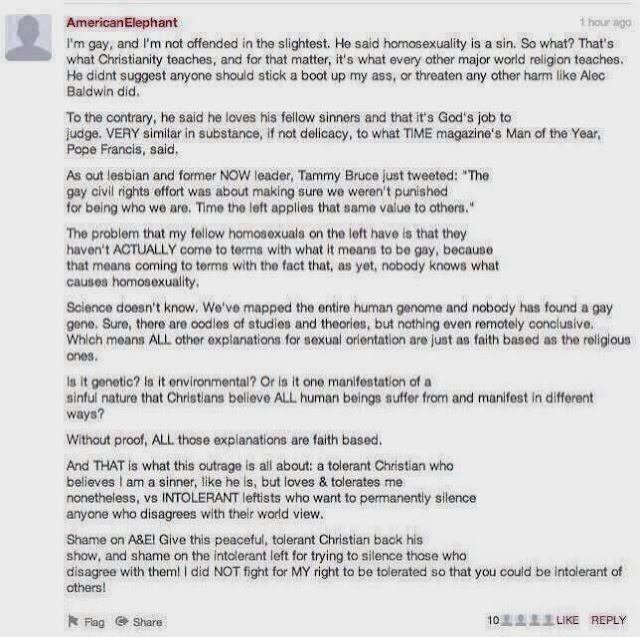