We arrived in Orlando on Wednesday night, for 5 glorious, fun-filled days at Walt Disney World.  It would be a quick trip and yet, it would be a 5 day trip and that's nearly a week!  Yea for a week!

And after a full day of fun and aching legs at The Magic Kingdom, we had a day off to just chill and visit Downtown Disney and switch from our 1st hotel to our 2nd, a tiny one to a bigger resort.  Easy, right?  Right?

Um, no.  Never.  Our luggage, apparently couldn't find the new hotel.  Apparently Elizabeth couldn't either.  But that's another story.  The luggage was on a direct route from hotel 1 to hotel 2 and managed to get lost.

EIGHT AND A HALF HOURS LATER and after many phone calls to track it and direct it and beg for it ... it arrived.  By a man who was not any too happy that we didn't tip him.  But suffice it to say that I don't tip men with black underwear and plumber's crack.  Walt would not have been happy with my view.  Sigh.

And back to Elizabeth ... Let's just say that she likes to get on ANY Monorail, NO MATTER WHERE IT'S GOING!!  Even if it means that you are MILES from your destination ... and I do mean miles.  Good grief.  I saw more of Orlando on the first night than I saw in my previous five trips.  And I have the shin splints to prove it.

But it's saturday morning now and here's how I feel about this trip so far: 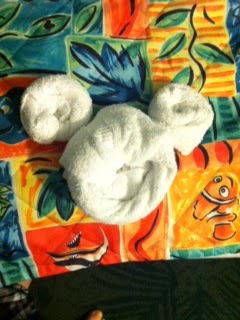